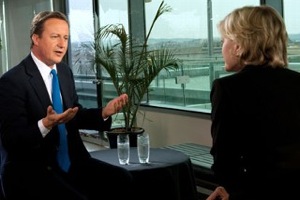 In an interview with ABC’s Diane Sawyer scheduled to air tonight, UK Prime Minister David Cameron argued that a thorough investigation of the release of Lockerbie Bomber Abdelbaset al-Megrahi was unnecessary, but despite this he promises to work hand-in-hand with the US government in their investigation of possible connections between al-Megrahi and BP.

al-Megrahi was released and relocated to Libya on grounds of compassion after doctors concluded he was terminally ill and had three months to live. Almost a year later, he is alive and well and expected to continue his life. The decision was made by the government of Scotland, not the greater UK something Cameron pointed out when he told Sawyer further investigation wouldn’t be helpful: “I don’t need an inquiry to tell me what I think I already know, which is it was a bad decision to release him and it was a bad decision to even contemplate this.” Cameron also added that he believed al-Megrahi should “have died in jail” and added that his cabinet secretary would be investigating the legal papers fill in order to release al-Megrahi.

Despite being very vocally opposed to al-Megrahi’s release, Cameron was also staunch in his defense of BP after reports surfaced that the energy corporation was involved in negotiating the Lockerbie bomber’s release. He warned against “trying to connect” the BP-orchestrated disaster in the Gulf of Mexico and the release of the Lockerbie bomber:

“There are arguments about BP in the Gulf and there are arguments that BP should answer about who they lobbied about what and when and all the rest of it,” he said, “but I don’t think that actually changes what really happened, which was a decision was taken by a legitimate government.”