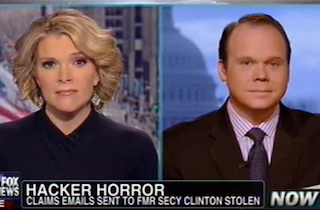 The hacker “Guccifer” recently claimed to have gained access to (and supposedly circulated among political and media figures) confidential memos between Secretary of State Hillary Clinton and confidant Sidney Blumenthal about the attack in Benghazi. The media then, Megyn Kelly noted during a segment on Thursday afternoon, is in an interesting position.

The memos “contain correspondence about a subject that is newsworthy,” but they were obtained illegally by a hacker. What do they do?

“Salivate,” Chris Stirewalt answered, going on to note an irony. When the Bush family was hacked and the information was relatively “inconsequential” — example: paintings — much of the media did cover it. In Clinton’s case, however, the hacking pertains to a more relevant and consequential matter, yet the media’s stayed away.

“Because it could be a matter of real significance,” he added. “It’s not just a matter of teasing the Bush family. It’s about…a lot of unanswered questions.” Journalists surely would “sure love to have this stuff,” but responsible journalism entails they wait to see if it gets out, Stirewalt argued.

The situation is causing many to ask if there’s a smoking gun or more memos, Kelly chimed in. It’s a tempting, behind-the-scenes story, but “what a dangerous precedent if we start running around using the fruits of these ill-gotten gains.”

The pressure is on Clinton and the State Department to respond and confirm whether the acquired information is true, Stirewalt said. If so, there may not be a smoking gun, but it would speak to Clinton’s “state of mind.”

“It does beg the question of whether correspondence should be taking place offline,” Kelly also noted, in a segment filled largely with questions. “It compromises our officials…What if it were something that, present day, was a matter of life and death?”

“The hacking movement gets bigger and bigger,” Stirewalt replied. “Nothing is really secretive.”