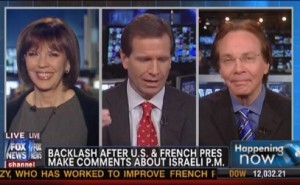 Reporting on the alleged comments by French President Nicolas Sarkozy and President Obama over a hot mic has been remarkably uncritical, failing to note the fundamental weakness of the quotes attributed to the two world leaders. On Fox News’ Happening Now, anchor Jon Scott hosted a panel on the remarks that illustrated why journalists should hesitate before amplifying remarks that could inflame diplomatic relations.

The conversation apparently began with President Obama criticizing Sarkozy for not having warned him that France would be voting in favor of the Palestinian membership bid in UNESCO despite Washington’s strong objection to the move.

The conversation then drifted to Netanyahu, at which time Sarkozy declared: “I cannot stand him. He is a liar.” According to the report, Obama replied: “You’re fed up with him, but I have to deal with him every day!”

There’s no doubt that remarks intended to be private were broadcast to French journalists via translation headsets. The Associated Press confirmed this, and explained why they didn’t report on the incident:

Several French-speaking journalists, including one from The Associated Press, overheard the comments but did not initially report them because Sarkozy’s office had asked the journalists not to turn on the headsets until the press conference began, and the comments were deemed private under French media traditions.

What’s not so clear, from available reporting, is who transcribed these two quotes, how they were transcribed, and when. The original report suggests that the active headsets took the French journalists by surprise, and that they “did not have a chance to take advantage of this fluke.”

All of this goes to the reliability of the specific quotes reported, especially the one attributed to President Obama. Slight quirks in translation, inflection, and context can dramatically alter the meaning of what he is alleged to have said. The fact that these quotes could very well have been transcribed later, from memory, out of context, and through two different translators, is significant in allowing the reader to judge their accuracy.

Fox’s Jon Scott touched on this idea as he moderated a discussion of the story between Newsmax’s Judith Miller and Fox News’ Alan Colmes.

Colmes pointed out the underreported fact that President Obama was standing up for Israel in his discussion with Sarkozy. “The context of this conversation was how can we get the Palestinians to not go to the U.N. to ask for state recognition,” Colmes pointed out. “This is actually favoring Israel.”

But it was Scott who cut to the heart of the matter when he asked Miller, “We do hear, judy, that there were only fragments of the conversation reported, are we jumping to conclusions here?”

That’s a question that should have been embedded in all of the reporting of this incident.

He is, of course, correct. All of the available reporting on this suggests that these were fragments of a conversation, leaked to unsuspecting journalists who weren’t prepared for it, through two different translators. For all we know, President Obama did say “You’re fed up with him, but I have to deal with him every day,” and went on to say, “so don’t f**king talk about him like that, Nicky!”

There has also been little, if any, attention paid to the murky ethical questions about reporting these remarks. While it doesn’t meet the legal definition of eavesdropping, reporting on these remarks definitely falls outside the code of conduct expected of beat journalists. In the US, there are explicit rules against reporting on overheard conversations, even in areas where there’s no expectation of privacy.

White House Press Secretary Jay Carney addressed the controversy earlier today, during a gaggle aboard Air Force One. Here’s a transcript of that exchange:(via email from The White House)

Q Jay, there’s a report out of Paris that Sarkozy told the President that he couldn’t stand Netanyahu. Do you think this kind of bad relations may have any impact on the peace process?

MR. CARNEY: Well, I don’t have any comment on the reported conversation that took place apparently in a bilateral. But, again, I don’t have any comment on the conversation specifically. I mean, stepping back, I will say that it’s well known that the President and that the U.S. and France did not agree on the UNESCO vote regarding the Palestinians and that we — the President’s position, very firm position, has been that efforts to achieve U.N. membership or membership in U.N. agencies by the Palestinians were premature and counterproductive to the ultimate goal here, which is a negotiated peace between the two parties.

Q Do you think, though, this reflects a growing frustration with world leaders with Netanyahu?

MR. CARNEY: I don’t have any comment on the specific conversation.

Q The President said, “You’re fed up with him; I have to deal with him every day.” So clearly there’s something that the President said, there’s dislike there. What are we supposed to take away from that message?

MR. CARNEY: Well, again, I don’t have any comment on the specific conversation. What I can say more broadly is that this President’s position has been quite clear on the issue of efforts by the Palestinians to achieve through the United Nations what can only be achieved effectively through direct negotiations. And the President believes very firmly that both sides, the Israelis and the Palestinians, need to take those steps that bring them closer together to direct negotiations and not ones that make it harder to have that happen.