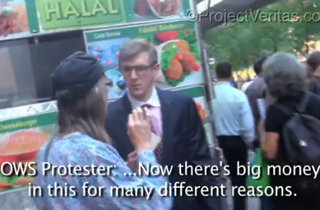 The New York twittersphere blew up yesterday afternoon as rumors began to circulate that conservative filmmaker/provocateur James O’Keefe had made a landing in their midst. It took only one day for O’Keefe to release a report of what he found. Despite posing as a banker in a disguise so transparent it made Clark Kent look like Lady Gaga, the protesters were by and large friendly to O’Keefe, offering him cake, and complimenting his suit, some with the objective of luring him into some sort of anti-capitalist get-rich-quick scheme.

The video, released by Breitbart.tv today, shows O’Keefe walking around the grounds at Occupy Wall Street unencumbered, approaching individuals and introducing himself as a Wall Street banker whose curiosity got the better of him. He is not welcomed enthusiastically, but certainly not kicked out, and the first person we see him talk to offers him cake. O’Keefe later tweeted that he considered their behavior “good-natured” because they wanted money from him, referring to the longest exchange in his video, where one individual attempts to convince him to invest in the “Constitutional World Federation”– some sort of anti-corporation corporation– and promised O’Keefe “billions and billions.” When O’Keefe thanks him for the opportunity and expresses pleasure to find a “fan of investing and capitalism,” the protester looks askance at him and corrects him on being a “fan of capitalism”– he’s just a fan of money.

While his arrival at the event was widely publicized on Twitter, where many were told not to instigate him, it is still surprising that he was, by and large, not confronted. While it is possible many people just didn’t know who he was, the fact that people can be seen photographing him from afar proves there were at least some elements that were well aware of his fame. But just because O’Keefe did not corroborate reports that the mobs were violent or catch them in any activity as insidious as his ACORN or NPR reports found doesn’t mean he didn’t make a stinging point against the protesters: at least some of them are willing to sell their hatred of capitalism in the free market, in the hopes of becoming the 1%.