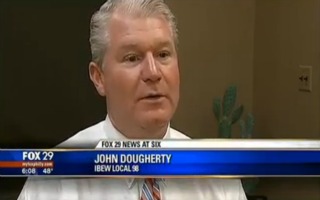 A Philadelphia chapter of The International Brotherhood of Electrical Workers, or IBEW local 98, has brought local residents to tears over their protest tactics. Literally. Just steps away from a residential apartment building, the union has set up an iPod that plays a recorded message followed by the loud, seemingly angry crying of a riled-up infant.

The union is protesting the use of a non-union contractor to do electrical work at the apartment building, on N. 47th Street in the Wynnefield section of Philadelphia. The message tells the residents, “Your community is crying for jobs, participation and fair wages.” It’s been playing every day for the last week, from eight in the morning to mid-afternoon.

Residents are becoming increasingly frustrated with the union’s tactics. David Dickson pointed out incessantly playing the crying baby sound is “not helping them.” Jean Smith, another apartment resident, says, “I know everybody says they’ve got their rights, and that’s fine. But don’t we have rights too, that we have to hear this constantly — every day?”

John Dougherty, the head of the union, is unapologetic about his tactics, saying, “It’s well within the law. It’s within the first amendment.” He was, however, delighted to receive a visit from Bruce Gorden, an anchor on local Philadelphia news station Fox 29. Dougherty told the station, “because Bruce Gordon came here, on behalf of Christmas and me being a Christmas type of guy, I’m going to (play) Christmas carols up there, starting tomorrow.”

Watch the full clip below, via Fox 29: