Univisión’s Jorge Ramos To Gingrich: How Did Your Affair Differ From Clinton’s? 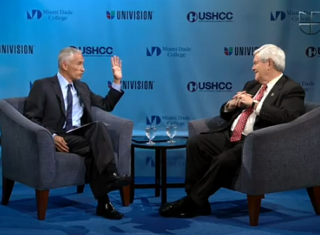 A sign of the times? The most comprehensive, mature, and convincing conversation Newt Gingrich has had with the media so far about his dubious personal history comes to us from Univisión, where their top journalist, Jorge Ramos, sat down for an extensive interview with the candidate released today. Ramos went where few journalists have gone before with Gingrich– a comparison of his second known affair with President Clinton’s– and got a fair and long answer.

“I take full responsibility for these questions,” Ramos began, so as to distance himself from his channel before challenging Gingrich on personal questions. “When you were Speaker of the House, you criticized President Clinton for having an extramarital affair.” “No,” replied Gingrich, “I criticized him for lying under oath in front of a federal judge, for committing perjury, which is a felony for which normal people go to jail.” Ramos continued his question, however, stating that Gingrich was doing the same thing. “I was not doing the same thing– you didn’t hear my answer.”

“Many people think that is hypocritical.” Gingrich responded that that was true because “they listen to your question, but they don’t listen to the facts.” Gingrich did not go on to attack Ramos, however, in the way one would expect him to attack, say, John King. Instead, he fleshed out his answer. “Look, I’ve been through two divorces, I’ve been deposed both times, under oath. I’m not a lawyer, and I know it’s a felony. Clinton is a lawyer, from Yale Law School, and he knew it was a felony.” When Ramos repeated that that wasn’t exactly assuaging anyone’s concerns about his character, Gingrich replied with vintage Gingrich: “somewhere here there is a synapse missing. I didn’t do the same thing; I never lied under oath.”

Ramos then left that topic and went into even murkier waters, but asked the question in a way that left him completely protected from a Gingrich attack, asking why he blamed the media for exposing the “open marriage” question, and whether he believed it to be a legitimate concern. Gingrich attacked ABC for the story, and Ramos continued, “Isn’t that a fair question about your character? That’s the kind of question that we have to ask.” Gingrich agreed. “Have I blamed you for asking? No.” He went on to explain, again, that the open marriage claim was “a lie” and then turned to the John King incident: “The CNN commentator decided to make it the first question in a national presidential debate, and I thought to myself– ‘we have unemployment, we have immigration, we have Afghanistan… and this guy thinks that this kind of trash should be the first question in a presidential debate?'”

The exchange is fascinating for two reasons– the first being that it is the first time that Gingrich addresses the Clinton comparison head-on during this election cycle, and does it without sniping at the interviewer. The second is the latter in general. Ramos figured out what many in the media have yet to about Gingrich: if you present yourself as a separate entity from “the media” (much easier for Ramos to do as a Univisión correspondent than those in English-language cable news positions, to be fair), Gingrich will take the bait and attack the strawman, rather than treating you, the interviewer, as a member of the “other” group of media. Not only does it give Ramos the ability to come off looking like the most talented matador getting in the ring with Gingrich so far, waving the red flag of infidelity unscathed, but it gives Gingrich the opportunity to prove that he can have a civil conversation with a journalist without trying to make them look foolish– a win-win for both parties. Ramos also sat down with the other Republican candidates for similar interviews, so we can expect more of these as the week rolls on.

The segment via Univisión below: