Unlike Rep. Bachmann, Chris Matthews’ ‘Super Ego’ Tells Him When He’s ‘Making An Ass’ Of Himself 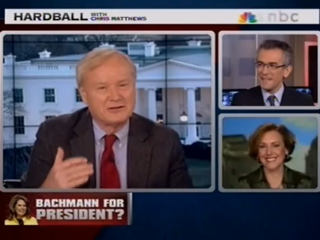 Rep. Michele Bachmann sure is starting to act like a presidential candidate, and while she has many followers among conservatives, much of the left wing is in stitches over her attempt to garner attention. In a segment marked by stifled laughter, Chris Matthews, Joan Walsh, and Richard Wolff tried to make sense of what she was up to, and Matthews could only conclude that she had no filter which warned her when she was “being an ass.”

Rep. Bachmann has been going around the country and rallying supporters with no official word that she is interested in the presidency. And, yet, she has decided to rebut President Obama’s State of the Union address on Tuesday– despite Republicans already choosing Rep. Paul Ryan to do the same in an official capacity. To Matthews, this indicated that she was saying, “If Sarah Palin doesnt run, I will. I’m there.” Walsh seemed to agree that this was her message, though found it to also be a personal defiance of Rep. Ryan, who had clashed with the Tea Party movement in the past. Matthews, however, couldn’t get over the fact that she was defying someone of seniority and looking like a presidential candidate. “We,” he said to his panel, “have super egos. We have that thing that Freud says, says ‘slow down, stop it, you’re making an ass of yourself.'” He continued opening this can of worms by noting that “these people dont have that thing… she just runs for president without having any pretense.” The rebuttal from the right can’t be long in the making.

Matthews also read an excerpt of her speech, which had already been released to the press, and mocked it for being “grandiloquent” and making her “sound like she’s, what, Thomas Paine?”
The segment from last evening’s Hardball via MSNBC below: