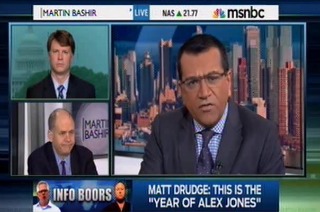 Once in a while, partisan political writers stumble onto a premise that is just too good to thoroughly vet. Even if the attack in question may be a stretch or even outright misleading, it skewers their opponents in a way they find too satisfying to abandon. No better example of this exercise in folly can be found on today’s episode of Martin Bashir in which the liberal partisan guests made their best effort to link the conspiracy theorist Alex Jones and his paranoid website, InfoWars, to the Republican Party.

Bashir began this clumsy effort on Tuesday by noting the inexplicable tendency of Matt Drudge and his editorial team to link to InfoWars material when they are pulling on an especially ridiculous thread which purports to indict the federal government for one or the other offense against decency.

“Honestly, the idea that anybody would be giving this guy who is just seeking to expand his far right-wing empire any more attention?” Jonathan Alter asked rhetorically. “My actual view is that he should be boycotted.” One could quibble with the use of the term “right-wing” when what Alter means is “crazy,” but he be forgiven for that marginal slight. The rest of the segment, however, is far less forgivable.

Bashir went on to note to Huffington Post Washington Bureau Chief Ryan Grim that “not everyone on the right” subscribes to Jones’ paranoia, including RedState blogger and Fox News Contributor Erick Erickson and the National Review editorial board who were among many the many being openly critical of Drudge’s penchant for linking to InfoWars. After this perfunctory disclaimer though, the pair went ahead and linked Jones and his nutty website to the conservative movement anyway.

“How big a problem do these conspiracy theorists pose for the GOP as it continually tries to rebrand itself?” Bashir asked.

“They’re a huge problem,” Grim replied dutifully. He went on to say that Birtherism, another baseless complot clung to by only the most recalcitrant of conspiracy theorists in the face of an almost universal shunning by the vast majority of the Republican Party’s members, as an example of “what a big problem” conspiracy theorists are for the GOP.

Grim praised the responsibility of progressive websites who he says took it upon themselves to shun 9/11 conspiracy theorists. Which, of course, is why you didn’t see hundreds of “truthers” marching in Denver at the 2008 Democratic National Convention… or did you? Furthermore, those noble progressives who spurned conspiracy theorization surrounding 9/11 must have missed prominent liberal actors like Woody Harrelson, Martin Sheen, and Ed Asner who agreed to make a 9/11 conspiracy theory film in 2012.

Many progressives did reject “truther” conspiracy theorists and mocked them out of their movement – and good for them. This was also true of conservatives who shamed many of their party’s prominent commentators and lesser politicians who were quick to embrace “birtherist” theories early in the Obama presidency. For Grim, however, making mention of this contretemps would spoil his premise.

Grasping at straws to keep his narrative alive, Grim cites a general mistrust of the media and the government – maybe the two most elementary unifying principles of the Republican Party’s base – to reinforce the notion that conservatives are generally prone to believing conspiracy theories.

Grim then cites unnamed “establishment figures” within the GOP supporting “Birtherism” and “email chains” which he says also support the claim that conservatives are gullible, paranoid fools. The citation of “email chains” to support a conclusion should, in any just universe, be grounds to dismiss all preceding claims.

It is rare that you get to watch an argument fall apart over the brief course of its articulation, but this is one of those delicious occasions.

On the day of the Boston Marathon bombing, former Democratic Congresswoman from the Georgia, Cynthia McKinney — who served six terms in the House and became the Green Party’s 2008 presidential nominee — linked to an article on her Twitter account blaming the terror attack on the authorities. She suggested, by expressing agreement with that post, that the signs were clear that the bombing was a “a false flag effort by the government.”

McKinney is no longer an elected official and to cite her credulity and paranoia as evidence of a trend within the Democratic Party would be disingenuous at best. More likely, it would be indicative of a deceitful effort to discredit a popular movement by elevating one of its least reputable voices and claiming they are representative of the whole. This is an intellectually vacuous tactic well beneath the Huffington Post’s Washington bureau chief.

In the wake of the Newtown tragedy, Meidiaite columnist Josh Feldman perfectly criticized CNN hosts Anderson Cooper and Piers Morgan for airing and debunking conspiracy theories surrounding the shooting. While regularly describing the anonymously advanced theories as being “sickening,” the CNN hosts were devoting airtime to those baseless theories on a national cable news network. Their design was, of course, not to debunk the “ignorant” theories but to publicize them and generate exciting television.

Much the same can be said for segments like Bashir’s. This was a transparent effort to attempt to establish the Republican Party’s guilt by association without having to establish much of an association along the way. It is a good way to add to the embarrassingly long and growing list of apologies MSNBC and it’s hosts have had to issue over the course of the last 18 months. It’s lazy and it is not journalism.