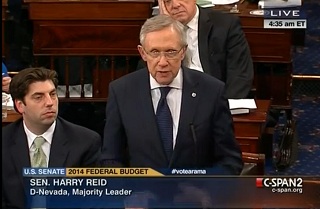 Just moments before 5:00am on Saturday the US Senate completed its “vote-a-rama” and managed to perform a very basic task that it hasn’t in over four years: pass a federal budget. Of course, the Senate, completely oblivious to how normal it is for legislative bodies to pass these things called budgets spent a chunk of their very early morning session applauding themselves for doing their jobs.

The budget passed on a mostly party line vote but not before the two most prominent leaders in the Senate, Majority Leader Harry Reid and Minority Leader Mitch McConnell proceeded to pat not just themselves on the back, but everybody else in the leadership of the US Senate for a job well done.
“Doing this has been a herculean feat but it’s been done by the leadership of Senator (Patty) Murray with Senator (Jim) Sessions. I think we all should recognize how hard this has been for some time,” he said drawing rousing applause from the chamber.

“You may not feel it at the moment but this is one of the Senate’s finest days in recent years and I commend everyone who has participated in this historic debate,” said McConnell.

For those of you keeping score at home the passage of a budget is a “herculean task” and “historic”, got that?

The self-congratulations for doing their job didn’t stop with Reid and McConnell as Murray and Sessions got in on it, too. Murray thanked all of the Senators for participating in the vigorous debate. “I am very proud of the budget we are about to pass,” Murray said.

“She’s managed this group like we needed to be managed,” said Sessions before saying expressing his disappointment with the final budget before them.

We all understand that when the Senate passes a budget, or as it is known a concurrent resolution, that it has no real power. It’s a symbolic blueprint that simply guides how other appropriations bills that have actual teeth will go. The mindboggling number of controversial amendments are non-binding, too, and merely add to the stack of things for opposition data miners to go through at election time. Still, it’s important

New York Senator Charles Schumer announced in January that a budget resolution would be passed by the Senate in the near future after House Republicans passed a resolution that would have revoked their pay if they failed to act. Schumer said the GOP’s posturing didn’t impact their budget plans as they already had one in the works. Still, the budget is important because it helps establish where the parties stand on the social and economic issues of our time in a clear and concise manner. It may not have teeth but it has significant symbolic importance in our national discourse.

The passage of this budget, too, takes a huge talking point away from conservatives that have contended for years now that Senate Democrats have refused to pass a budget. “The Senate Democrats haven’t passed a budget in four years! How can we take them seriously on fiscal issues?” Whether or not the average voter understands how the Senate works is moot because that talking point was technically true and a brutal.

The non-binding nature of the Senate budget makes its inability to pass in four years and the chamber’s celebratory mood on Saturday morning all the more amazing.

Watch clip below via CSPAN