Unresponsive Airplane Flying Towards Cuba (UPDATED: Read How It Unfolded) 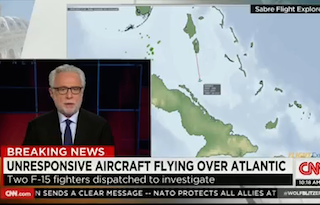 Two F-15 jets are accompanying an unresponsive aircraft that was supposed to land in Naples, Florida just before 12 noon ET Friday but has continued to fly towards Cuban airspace. The plane is Socata TBM-700 (single-turboprop) that contains seven seats, but there is no information yet as to how many people are on board.

Authorities do not know how much fuel is remaining in the plane and are hypothesizing that the pilot may be unconscious. The F-15s will be forced to leave the plane’s side if or when it enters Cuban airspace.

You can track the position of the plane at flightaware.com.

CNN’s Wolf Blitzer reported on the situation early in the afternoon on Friday.

Update — 1:30 p.m. ET: CNN has reported that the airplane has entered Cuban airspace and the F-15s following it have peeled off, leaving it on its own.

Update — 1:40 p.m. ET: NORAD has been using its Twitter and Facebook accounts to give updates on the situation, saying, “The fighter pilots visually verified that the pilot was unresponsive and slumped over the controls. The aircraft continues to be followed by NORAD jets. NORAD continues to monitor the situation in close coordination with the FAA.”

Update — 1:42 p.m. ET: The plane is a SOCATA TBM700, a “high performance single-engine turboprop light business and utility aircraft” according to Wikipedia. See image below: 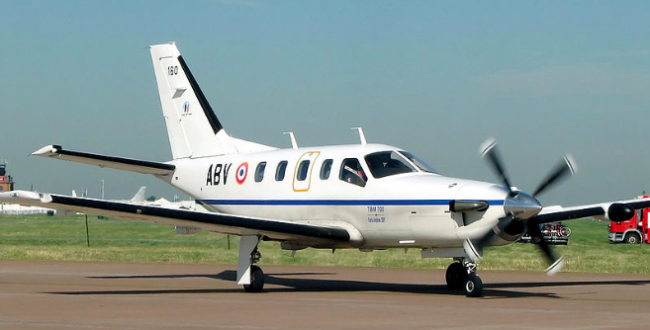 Update — 2:07 p.m. ET: The plane has now passed over Cuban land and it is flying over water south of the island as it comes closer to running out of fuel.

BREAKING: Jamaican officials say unresponsive US plane has crashed on the island.

Update — 2:53 p.m. ET: According to NBC News and other outlets, the plane crashed 14 miles north of Jamaica in the ocean:

Update — 3:25 p.m. ET: Rochester, NY’s ABC affiliate have confirmed that Larry Glazer and his wife Jane Glazer both died in the plane crash just off the coast of Jamaica Friday afternoon:

BREAKING: Larry and Jane Glazer have both died in the plane crash off the coast of Jamaica the family confirms #13WHAM

The plane had been licensed to Buckingham Properties, which is owned by Glazer, who was a wealthy property developer in the Rochester region. They were the only two people on board the plane when it crashed.