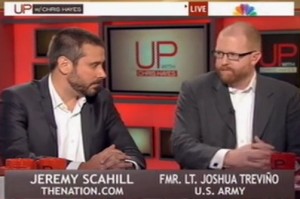 Last Sunday, Up with Chris Hayes host Chris Hayes ignited significant outrage with his musings about the word “heroes.” This morning, Up panelist and national security reporter for The Nation Jeremy Scahill waded into controversial semantic waters by repeatedly accusing President Obama of “murder” through the administration’s use of drone strikes, which have killed an indeterminate number of civilians.

Surprisingly, Scahill’s indictment of the President was challenged, not by Hayes, but by Redstate.com co-founder Joshua Treviño.

The topic of discussion was the so-called “kill list” of suspected terrorists to be exterminated in drone strikes. Hayes began by trying to drill down on Scahill’s use of the term “murder” in an earlier segment. “Obviously, that’s a loaded verb because it carries certain moral and legal ramifications,” Hayes said.

Scahill compared the drone strikes to a mall shooting spree. “If someone goes into a shopping mall in pursuit of one of their enemies and opens fire on a crowd of people, and guns down a bunch of innocent people in a shopping mall, they’ve murdered those people,” Scahill said.”When the Obama administration sets a policy, when patterns of life are enough of a green light to drop missile on them or to use AC-130s to spray them down.”

He then elaborated on his accusation. “If you go to Yemen where I was, and you see the unexploded cluster bombs,” Scahill said, “and you have the list and photographic evidence, as I do, of women and children that represented the vast majority of deaths in the first strike that Obama authorized on Yemen, those people were murdered by President Obama, on his orders, because there was believed to be someone from Al Qaeda in that area.”

Scahill described one strike that he’d investigated in Yemen, which resulted in the deaths of 21 women and 14 children. “It’s murder,” he said, “it’s mass murder, when you say ‘we are going to bomb that area because we believe a terrorist is there,’ and you know that women and children are in the area.”

Redstate co-founder and Army veteran Josh Treviño jumped in. “In the 60 days before D-Day, the US air forces based out of the UK conducted a road interdiction campaign in France. Basically, if you were on the road or along a railway between Paris and Brittany, for those 60 days, you were attacked by the US Army air forces. The intent was to shut down Wehrmacht activity in advance of D-Day.It killed thousands, thousands of French civilians. Were they murdered?”

Scahill paused for several Mississippis before deciding that they were.

“No reasonable person thinks they were murdered,” Treviño said.

Scahill’s remarks have resulted in outrage significant enough for him to later tweet “Tell them the truth and they call you a traitor//Talk to them honestly and they call you a hater,” which is a lyrical snippet from Immortal Technique’s Eyes In The Sky.

Based on the definition he gives, Scahill is calling almost every wartime US President, and some non-wartime Commanders-in-Chief, murderers. There are things that make the drone strikes different than other types of civilian killings, but the premeditated deaths of innocents are not something new.

Agree with Scahill or not, this is the kind of tough conversation that got Hayes’ show in trouble last week, but also the kind of conversation you won’t see anywhere else on TV, so it’s good to see that a brush with danger hasn’t scared off Hayes and co.

Update: Jeremy Scahill points out that in his Up with Chris Hayes appearance, he was referring specifically to a Dec. 17, 2009 cruise missile attack on al Majalah, not a drone strike:

Just a point of clarification. If you actually listen to what I was saying on “Up With Chris,” I was discussing two specific cases. One, was the December 17, 2009 cruise missile strike on the Yemeni village of al Majala. I investigated that strike on the ground in Yemen, and did a 30 minute documentary on it for al Jazeera. It was the first strike Obama authorized on Yemen. The vast majority of the victims–35 in all–were women and children. The US used horrendous cluster bombs in that attack, which shred human beings into ground meat. Unexploded bombs killed more people a few days after the strike. That was not a drone strike. The other issue I discussed was the so-called “Signature Strikes.” The idea that you target people based on the fact that they are “military aged males” or patterns of travel or geography is extremely dubious and will undoubtedly result in innocent people being intentionally targeted. To me, drones are not the prime issue we should be debating; the kill program is the issue. Whether it is Tomahawk cruise missiles fired from the ocean, Hellfires fired from drones, or AC-130s firing on people is, in many ways, a side issue. Those are the vehicles for implementing a policy.