MSNBC’s Up With Chris Hayes: A DVR Gem In The Making 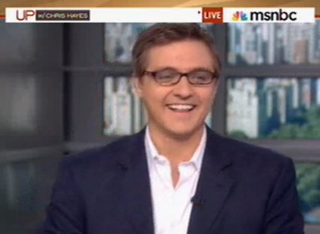 After several years of fan demand and a few months of speculation as to how this could possibly work, Up with Chris Hayes is finally, well, up. The show, which airs at 7 AM on Saturdays and 8 AM Sundays, is led by the familiar– albeit slightly more lighthearted than usual– Chris Hayes, and on its first airing, it is readily apparent that Hayes has no intention of hosting a morning show, but bringing his primetime aesthetic to a new audience.

The debut program spent most of its time covering the potential execution of Texas inmate Duane Buck, and what the response to Gov. Rick Perry‘s capital punishment record means to the current Republican Party. While the program looks a lot like Morning Joe (it’s colored in sunny oranges and reds and the casual breakfast table look remains), it feels nothing like a morning program. Rather, anyone who has seen Hayes host Rachel Maddow or The Last Word will recognize the feel instantly– slightly wonky, fairly serious, but without taking itself more seriously than the stories it covers. Hayes was joined for most of the program by former New York Times columnist Bob Herbert and the American Conservative‘s Michael Dougherty, and later engaged in a round table discussion with the two, MSNBC contributor Alex Wagner and liberal comic John Fugelsang.

Serious as the capital punishment subject matter was, however, the defining segment– at least for this viewer– of the program was a discussion over the now-viral National Geographic clip of a drunk Rep. Ron Paul fan telling police officers to “read the Constitution,” which you can watch (via MSNBC) below:


What for many was simply a comical drunk person clip became in Hayes’ eyes a classic representation of “the emotional appeal of wanting the government off your back”– a demonstration of why Americans continue to be libertarians. Hayes admitted that, as an avowed liberal, even he felt the pull of libertarian temptation when trying to get something done in a big company, but ultimately concluded that rejecting bureaucracy was simply “immature.” The panel mostly agreed with this argument, with Dougherty as the resident devil’s advocate arguing that the opinions of the drunk man were “the world view of the Founders, and it is beautiful, and we should cherish it.”

The clip epitomized the lighthearted-yet-relevant type of discussion that has defined some of the most popular (and newer) shows in cable news, notably The Five on Fox and, to a lesser extent, Morning Joe. It also exposed the fundamental flaw with such a show: the lack of diversity of opinion. Dougherty did what he could, but having a table full of liberals trying to make sense of libertarianism and concluding, without any real opposition, that it was simply an “immature” world view doesn’t contribute much to the national discourse. Of course, judging a show that hasn’t proven its mettle yet by its first guests– particularly judging a new program on MSNBC for not initially attracting enough conservative voices– is a premature point to make.

More importantly, Hayes and company are on track to create something similar to what the 3 AM Red Eye crowd have– a DVR sensation. The subject matter is not remotely catered to the audience one typically assumed to be up at 7 AM; there are no feel-good squirrel-on-water-skis stories (unless the drunk Ron Paul fan counts), nor is there much about the dangers pop culture present to our children. Up! is not Fox & Friends, and it’s certainly not Morning Joe, similar aesthetics aside. Whatever expectations had of Hayes as a host were more than fulfilled– if you’ve seen an episode of Rachel Maddow or The Last Word he has hosted, you basically know what to expect of Up!

The mildly giddy, slightly-overcaffeinated atmosphere serves for a great discussion venue, and with a bit more diversity at the breakfast table, Hayes has a hit on his hands– a hit that, like so many programs in the age of DVR and internet curating, will develop a following that far outpaces its 7 AM audience.