Up with Chris Hayes Panel Erupts In Epic LIBOR Nerdfight 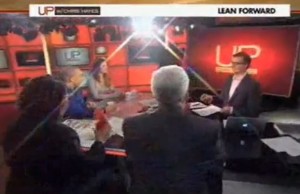 Let’s face it, pretty much any argument on MSNBC’s Up with Chris Hayes can be called a nerdfight, but on Saturday morning’s show, host Chris Hayes and panel engaged in an exceptional example revolving around a big Mitt Romney fundraising bundler, and something called LIBOR. Like an episode of Star Trek dubbed in Esperanto, the segment was hard to understand, but still entertaining.

The whole thing has to do with Bob Diamond (I love on-the-nose names like that, or Storm Field), a Mitt Romney bundler who recently resigned from Barclay’s because it was learned that the bank was rigging LIBOR, which, despite the name, is not a ’50s-era sci-fi robot.

As Hayes explains (after a brief discussion of Carly Rae Jepsen‘s Call Me Maybe), “According to regulators, from 2005 to 2007, and then again during the 2008 financial crisis, traders at Barclays gamed the worldwide financial system by fraudulently manipulating a key global lending rate, the London Inter-Bank Offered Rate, known as LIBOR. ”

“The rate has an opaque name, but its function is simple,” he continued. “It’s the interest rate banks charge to lend money to each other. It’s also what the banks use across to world to determine how much interest you should pay for credit cards and student loans. We’re talking about a potentially massive number of loans, owed by ordinary consumers, that may have been affected by the rate rigging. In the state of Ohio, as much as 60% of prime adjustable rate mortgages, and nearly all subprime adjustable rate mortgages, are tied to the rate.”

Chris Hayes does a creditable job setting up the segment, but by the time former Joe Biden chief economist Jared Bernstein gets into it with UNC economist Karl Smith, Hayes’ explanation had worn off, and I had to rely on my own vague sense that Smith was the Klingon in this episode, and was relying on an “ends justify the means” rationale that I strongly guess I disagree with.

It’s almost more fun the less you get it, especially when, into the next segment, Smith says he would literally shoot someone if they didn’t lie about the LIBOR, then, when Hayes tries to clear up that he wouldn’t actually shoot someone, Smith says, “I most certainly would.”

The segment was entertaining and informative, and if nothing else, at least I won’t ever again embarrass myself at a cocktail party by asking “Who do you think would win in a fight, LIBOR or ED 209?”