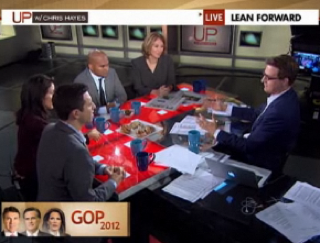 The sophomore week of MSNBC’s new morning show Up with Chris Hayes was charitable enough to bring with it an explosive 2012 Republican debate, and with that the potential fall of the GOP’s frontrunner. On the program this morning, host Chris Hayes and the panel couldn’t help but notice the “beaming joy” from Mitt Romney as he listened to Perry’s fledgling answers, and from that analysis ended up somewhere deep in the weeds of economic theory.

It was Hayes who seemed most delighted by how little Romney seemed to hide his excitement at Perry stumbling, particularly about a subject as important to conservatives as immigration. To show just how much Perry’s pro-integration arguments affected him, Hayes showed a clip of a member of Fox News’ post-debate focus group who appeared outraged that illegal immigrants were receiving the “service” of higher education from the state. To Hayes, the key to the mentality behind the right on this issue was in the word “served”– “they are not in the mood right now for any other people to get benefits.

Perry’s approach wasn’t entirely distinct from the pro-jobs platform he is running on that attracted so many voters, argued panelist Ezra Klein. Klein took the opportunity to steer the conversation towards why Perry emerged as such a strong candidate right out of the gate in the first place: the Texas jobs record, which he argued was “substantially the product of… a desire not to lock these people out of the job market.” Perry’s key debate mistake, Klein argued, was not simply that he told anti-illegal immigration Republicans they didn’t have a heart: “People who disagree with him don’t really have a good economic plan.”

As it is the lower wage jobs that attract said immigration, panelist Reihan Salam jumped in with a fairly interesting economic theory proposed by California conservative Ron Unz, who suggested that raising the minimum wage was the secret to lowering demand for cheap labor. If said cheap labor wasn’t legal, the desire to hire these workers would subside– a theory just wonky enough to get the rest of the panel extremely excited about challenging the theory, with Klein leading the charge, suggesting the idea led to “a very, very large black market for labor.”