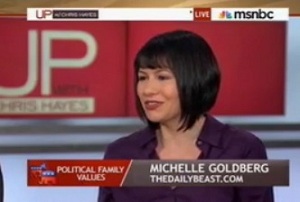 Now, I know that sounds really bad, but the point that Up with Chris Hayes panelist and senior Daily Beast writer Michelle Goldberg was trying to make about Ann Romney‘s Mother’s Day op-ed was actually rather innocuous, or at least self-consciously amorphous. Similarly, when host Chris Hayes compared Mrs. Romney’s mom-ifesto to a “hostage video,” he meant it in the nicest possible way.

Goldberg started out discussing the GOP’s attempt to revive the Hillary Rosen controversy, in which a Democratic strategist made a perfectly legitimate point, and then, in typical Democratic Party fashion, could not stop apologizing for it (she did so again this morning, on Meet The Press). She wondered if the degree to which Republicans have milked the story had turned Ann Romney from a neutral figure into an “insufferable” one.

As I’ve said before, that’s a moot point. Ann Romney is a political spouse, so even if she went around recommending cake to starving people, any whiff of an attack on her is always going to be a net loss. That’s too bad, because after years of Democrats trying to get people to understand that motherhood is political, Ann Romney is the flesh-and-blood embodiment of that concept. As the panel later pointed out, if there’s a “War on Mothers,” it’s in the form of deep-rooted resistance to government policies that might actually help those mothers who lack the privileges that Ann Romney (through no fault or vice of her own) enjoy.

Even if you found Ann Romney’s politicized glee at the faux outrage that the Rosen flap incited, even if you think she’s “insufferable,” hell, even if she is insufferable, you’ll always lose by saying it out loud. That’s because, legitimately, she has a right to be all of those things, and worse (or better), because she’s not running for office. Better to focus on the guy who is.

So I had to force out a laugh when Goldberg described her unease with part of Ann Romney’s Three Seasons of Motherhood. “I found that phrase, the “crown of motherhood,” really kind of creepy,” she said, “not just because of its, like, somewhat you know — it’s kind of usually authoritarian societies that give out The Cross of Motherhood, awards for big families, Stalin did it, Hitler did it…”

It’s funny not just because you can hear millions of outraged heads exploding in advance, but because Michelle positions the Hitler thing as the second-most creepy thing about the phrase. She went on to say “It plays into this thing where  we have this kind of compact in the United States where what we deny women in social support or status or economic security, we make up for in this sort of insipid, condescending praise.”

That’s an excellent point, which Hayes compares to a similar disconnect between our individual reverence for “the troops,” and policies that don’t benefit them.

If nothing else, I learned something new today. The Nazis did, indeed, give out the Mother’s Cross of Honor, while Stalin’s Soviet Union had a whole series of Motherhood Glory medals that you can own for about $600. Who knew that those “World’s Greatest Mom” mugs were an extension of fascist totalitarianism?

For what it’s worth, I’m pretty sure if someone tried to award my mom the Mother’s Cross of Honor, or the Motherhood Glory, she’d probably have said something along the lines of “Why don’t you keep your medal, and just clean your room once in awhile?”

Similarly amusing was Chris Hayes’ observation of Ann Romney’s op-ed that “it reads a little like a hostage video,” and that “there’s a core of genuine desperation,” which he gets around to explaining as an acknowledgement that “it is super-hard, she was raising five boys. Without, as admitted by Mitt Romney, much help from Mitt Romney.”

I must admit to feeling some mischief-maker’s guilt at posting this clip, which I could rationalize by saying “Well, if I don’t, someone else will,” but I won’t. (after all, aren’t outrage junkies people, too?) As a media critic, I think this two-minute clip illustrates why I love this show, because all of the annoying weekend political chat cliches that I can’t stand, the posturing, the talking points, the inane, rehearsed doublespeak, and even the hyped-up Crossfire atmosphere of some political panels, fail in this format.

What’s left is that rarest of commodities in cable news, and the media in general: something real.

Here’s the clip, from Up: