Up With Chris Hayes Panelist: Obama ‘A Kind Of Monarchical Entity’ On National Security 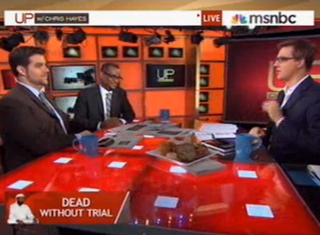 In the wake of the killing of Al Qaeda operative Anwar Al-Awlaki, many have raised questions as to the legality of executive military actions against US citizens such as Al-Awlaki, who lived for most of his terrorist tenure in the Middle East. In discussing the killing of the Al Qaeda leader this morning, Chris Hayes and his panel discussed the scope of the law President Obama used for his actions, with American Conservative contributor Michael Brendan Dougherty concluding that, in matters of national security, such actions were near-monarchical in nature.

Dougherty and Hayes were accompanied by Vince Warren, and attorney who had actually represented Al-Awlaki’s father. The Authorization for Use of Military Force statue, he noted, was “so broad that it is virtually undefinable,” and as such gave the President the permission to place American citizens (and otherwise) on assassination lists if necessary, which is precisely how the President targeted and killed Al-Awlaki. Given the big-government nature of the attack, Hayes then turned to some conservative responses– namely, that of Newt Gingrich, who argued that Al-Awlaki had received due process through being put on an assassination list. “Is that a good conservative response?” Hayes asked.

That Dougherty did not agree with Gingrich is an understatement. Emphasizing how “unserious, ridiculous, and morally disgusting that response is,” Dougherty proposed a parallel in which American played the role of Yemen in this situation: “Imagine if King [Juan] Carlos of spain said ‘Well, there is a pro-Basque separatist blogger in New Hampshire. I’m sending in a drone to drop a missile on the United States right now, and I signed an order, so its fine’!” He went on to call such an incentive “ridiculous” and, to widen the cap in response to President Obama versus a foreign leader, name-dropped the Duke of Luxembourg, which got its own share of laughs. “So it’s really obscure monarchic entities that American object to,” Hayes joked.

Following that thread to its logical conclusion, however, Dougherty proposed that the President was, in fact, behaving as “a kind of monarchical entity when it comes to the War on Terror,” given the unilateral nature of the attacks and the fact that Congressional war authority was almost completely overlooked. Dougherty added that he found this “appalling” and that it was precisely why President Reagan signed a ban on assassinations, to keep the CIA in check. He did not entirely object to the conservative reaction to the killing, however, noting that libertarians– Rep. Ron Paul in particular– had stood up against this action.