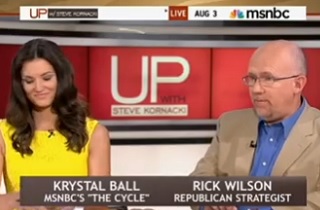 In what is becoming a disturbing trend, Up With Steve Kornacki host Steve Kornacki and a panel comprised of The Cycle co-host Krystal Ball, Buzzfeed reporter Evan McMorris-Santoro, and WaPo‘s Nia-Malika Henderson allowed Republican strategist Rick Wilson to repeat an egregious lie about President Obama and the stimulus, which Wilson took as an invitation to say it again. The show needs to either book sharper panelists, or more honest conservatives.

In backstopping for Republican obstructionism, Wilson argued that there’s skepticism about infrastructure spending, “and that is largely the fault of the Obama administration,” adding that “they promised by now, if we passed that stimulus bill, we would have 5% unemployment.”

In the clip, you can see Krystal Ball pull an expression that says “This tastes funny,” but she lets Wilson continue.

Probably amazed that the entire panel didn’t say “Hold the f*ck on, Rick,” he continued.

“Real unemployment is 14%,” he began, which is a way of saying some way of measuring unemployment other than the one everyone uses, and which can be pulled out of any handy orifice to claim anything. Why not say it’s 29%? Why not 100%?

Wilson goes on to explain that the public is skeptical of infrastructure spending (well, all but 72% of them) because “they didn’t see the stimulus dropping unemployment to, like I said, right now on their chart that they released, that the Obama administration released, 5% unemployment right now, because of the stimulus bill. That was their solid promise on it.”

Here’s the clip, which I let run long enough to show that nobody challenged the 100% of what he said was wrong, including the most egregious lie:

The idea that “the stimulus didn’t work” is one of the most durable, and least challenged by the Beltway press, lies of this presidency, but every member of Kornacki’s panel knows better, and should have corrected Wilson.

In January of 2009, as President-Elect, Barack Obama had Christina Romer and Jared Bernstein do a study projecting the effects of the stimulus. Far from a promise, it was chock full of disclamatory language like this:

“It should be understood that all of the estimates presented in this memo are subject to significant margins of error. There is the obvious uncertainty that comes from modeling a hypothetical package rather than the final legislation passed by the Congress. But, there is the more fundamental uncertainty that comes with any estimate of the effects of a program. Our estimates of economic relationships and rules of thumb are derived from historical experience and so will not apply exactly in any given episode. Furthermore, the uncertainty is surely higher than normal now because the current recession is unusual both in its fundamental causes and its severity.”

What they got wrong was just how badly Bush and the banks had decimated up the economy. The same month they wrote that report, we lost 750,000 jobs, the worst month of the recession, and we lost over 2 million jobs between Jan and March, when the Recovery Act was still lacing up its skates. If you control for these factors, which you must, since the Recovery Act didn’t take full effect for several months, the Recovery Act did exactly what they said it would. For Romney to complain about this is like a guy who reeks of gasoline bitching about how the fire chief is doing his job.

“First, the likely scale of employment loss is extremely large. The U.S. economy has already lost nearly 2.6 million jobs since the business cycle peak in December 2007. In the absence of stimulus, the economy could lose another 3 to 4 million more. Thus, we are working to counter a potential total job loss of at least 5 million. As Figure 1 shows, even with the large prototypical package, the unemployment rate in 2010Q4 is predicted to be approximately 7.0%, which is well below the approximately 8.8% that would result in the absence of a plan. (footnote 1) (footnote 1: Forecasts of the unemployment rate without the recovery plan vary substantially. Some private forecasters anticipate unemployment rates as high as 11% in the absence of action.)”

Of course, the unemployment rate rose more than two full points between then and June, when the stimulus began to take effect. If you control for those 2.2 points, their prediction was off by .2%. If you give the President a year, it was dead-on. Basically, what they’re doing is the same as holding a guy to a damage estimate the day after Hiroshima, but before Nagasaki.

There was never a “firm promise” to bring unemployment down to 5%, there was a completely accurate estimate of what the stimulus would, and did, do: mitigate the disastrous Bush meltdown. If there’s a lesson in the Romer-Bernstein report, it’s that there should have been more, and more direct, stimulus, not less. Now, what do you suppose would happen if a Democratic strategist tried to tell that truth on, say, Sean Hannity‘s show?

Steve Kornacki is a very strong political analyst, with a deep well of knowledge and sincere passion on the subject, but is missing the killer instinct to smack down this kind of garbage. If no one else is going to do it either, then they ought to stop booking guests who seek to litter the conversation with it.