USA! USA!: The Five Brings Us An Update On High School Basketball Story 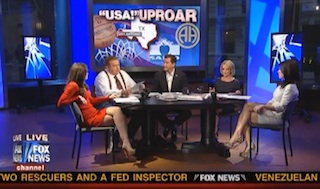 As I mentioned earlier, today was kind of a slow news day. Fortunately, however, the lack of big stories from Washington enabled The Five to delve into a news story that really is affecting all of us as Americans. I speak, of course, about the ongoing drama in the lead up to Millborough North High School’s Junior Prom.

Now, if you haven’t been following this dramatic story so far, I’ll fill you in on the details. This past week, news broke via Facebook that Suzy Henderson had agreed to go to the dance with Matt Mitchell. Politics insiders will of course remember that Mitchell broke up with Jane Kowalski, the girl who’s supposed to be Henderson’s best friend forever, only three weeks ago. A huge scandal has erupted with numerous allegations coming from both party, with Kowalski saying that Henderson is a “slut” and Henderson claiming that her former friend “Is totally flat as a board, you guys. There’s more tissue paper in there than a parade float.”

The Five‘s hosts delved into this important story, analyzing it from every possible angle. Eric Bolling argued that Henderson should have at least sent a text to Kowalski while Andrea Tantaros questioned Mitchell’s “wannabe player ways.” A good argument was put forward by Kimberly Guilfoyle who said-

…oh, wait. Oh my God, everybody. I think I’ve made a huge mistake. I totally didn’t hear right when I was watching The Five today. They didn’t dedicate a segment to a high school junior prom. That would be ridiculous. I mean, they’re on a national news channel.

No, The Five dedicated air time to something that’s really important; a high school basketball game. That makes much more sense. In fact, this is the second time they’ve talked about it this week. Because it’s important. To America.

Watch the truly important segment from Fox News below: