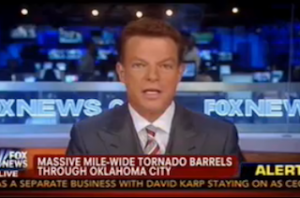 Fox News’ Shepard Smith had the unenviable job today of reporting the Oklahoma tornado’s devastation as it happened live to his viewers. The anchor clearly let his emotion and empathy shine through as he described the “utter horror” of an entire town destroyed.

“People who are in their short sleeve white shirts and their yellow shirts and their blue jackets,” Smith reported, “who just a little while ago lived in a town with their neighbors and this morning sent their kids off to school, are now on top of piles of completely unrecognizable debris.” He asked, “And you wonder, are they hearing sounds from beneath this? Are they digging in this one place because they know of somebody who needs help?”

While Smith expressed hope that everyone in this town would be “fine” in the end, he warned of a darker outcome. “It would be safe to assume that with of something of this magnitude, the reports of days to come may be quite sad indeed.” He continued describing the unfathomable destruction, remarking that there is no way to truly capture the scope of it on television. “You cannot know how bad it was, because the camera lens is not wide enough to show you how far and wide it stretches.”

Later, Smith described what it was like to be a kid in Mississippi, watching a “little sliver” of a tornado come out of the sky. But in Oklahoma, he explained, those little slivers can come down and widen until they are up to 1-2 miles wide, as happened today. Watching the story unfold, Smith said “you realize the power of mother nature and you realize how fragile all of this really is.”