VA Whistleblower: Vets’ Treatment ‘Worse Than if They Hadn’t Been Treated at All’
video

VA Whistleblower: Vets’ Treatment ‘Worse Than if They Hadn’t Been Treated at All’ 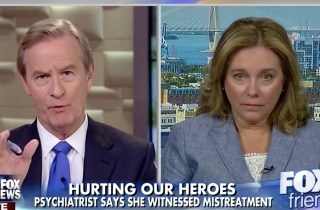 In an appearance on Fox & Friends on Monday, Veterans Affairs psychiatrist Dr. Margaret Moxness revealed that she had been “functionally silenced” after complaining about the poor care at VA facilities. She noted that the ongoing treatment of veterans was medically indefensible, that she thought suicides were “inevitable,” and that the treatment many veterans received was worse than “if they hadn’t been treated at all.”

Moxness said that the VA did not allow her to see patients ten days after their first visit and medication, “which means they’re partially treated.” She added that this procedure would leave vets “worse off than no treatment at all.”

When Moxness said she complained to her superiors, she was “functionally silenced.”

“I knew the suicides were inevitable,” Moxness confessed.

She said that she could have intervened and treated some of her patients if she was able to monitor them more closely. “Do they not take doctors seriously? Do they talk to each other? I don’t know,” Moxness asked. “It’s very frustrating to say the least.”

RELATED: Fox & Friends ‘Outraged’ Over VA Scandal: ‘No One Is Doing Anything!’

“It is a problem that is beyond the scope of the VA, but the VA is particularly handicapping being able to handle it because the bureaucracy is so heavy,” she noted.

She said that there should be prosecutions of VA administrators who no longer care about the treatment their patients receive.