Valerie Jarrett: ‘I Don’t Know’ if Obama Officials Ever Received Emails from Hillary 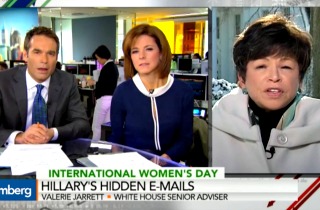 During a Friday morning interview on Bloomberg TV, White House senior advisor Valerie Jarrett was asked whether she or any other administration officials received emails from former Secretary of State Hillary Clinton on her personal clintonemail.com server. Her answer: “I don’t know.”

The grilling came at the tail end of an interview about the White House “Let Girls Learn” initiative, when anchors Erik Schatzker and Stephanie Ruhle pivoted to the ongoing Clinton email controversy, asking: “I’d have to imagine that while Hillary Clinton was Secretary of State you received emails from her…”

“I actually did not,” Jarrett insisted. “No, I have not received an email from Secretary Clinton.”

Schatzker pressed on: “Did members of the administration receive emails from the Hillary Clinton while she was Secretary of State?”

“That I don’t know,” the White House official responded. “I do know, obviously, that President Obama has a very firm policy that emails should be kept on government systems. He believes in transparency.”

That answer prompted Ruhle to ask point-blank: “Does that mean she broke the policy?”

And Jarrett’s answer: “I defer totally to the State Department for that.”

Asked whether she would fire someone on her staff if caught using a personal email system, Jarrett said, “Well, I don’t want to get into a hypothetical.”

Watch below, via Bloomberg TV: