Van Jones Battles Gingrich Over Vigilante Violence: Should You ‘Dress Your Kid In A Tuxedo’ To Buy Skittles?
VIDEO

Van Jones Battles Gingrich Over Vigilante Violence: Should You ‘Dress Your Kid In A Tuxedo’ To Buy Skittles? 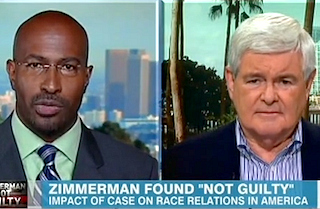 In a preview of their upcoming resurrection of Crossfire, Newt Gingrich and Van Jones appeared on CNN’s New Day on Monday morning and sparred over what impact the Zimmerman verdict could have over the sources and effects of violence in America. There was much scoffing.

Gingrich rolled out a popular conservative argument that the intense focus on the Trayvon Martin killing is a mob mentality that ignores, say, the scores of murdered black youths in Chicago, coincidentally Barack Obama’s hometown.

“No, the jury said he wasn’t guilty on the facts, sir.”

“One of the reasons it’ll be absurd for the Justice Department to manufacture a case is the prosecutors could not convince the jury it was a vigilante killing,” Gingrich said. “They believed it was an act of self-defense.”

“I respect those jurors,” Jones said. “But there is now a concern about, is this a green light for vigilante violence against young blacks? There is a danger now that you have to dress your kid in a tuxedo to send them out the door to buy Skittles, because somebody might confront them. And also, as a black parent, there’s a concern: if my child is confronted by a stranger with a gun, are they supposed to lie, spread eagle, do whatever they’re told?”

“The odds are overwhelming if your child gets killed in Chicago and is African American, they were killed by an African American,” Gingrich responded. “They didn’t need to wear a tuxedo, they didn’t need to buy Skittles…I don’t think the country’s sending a signal that it’s an open field day. I would just say that in terms of the media focus, in terms of the Justice Department’s focus, we would save a lot more lives by focusing on the primary sources of why people are being killed.”

Watch the debate below, via CNN: