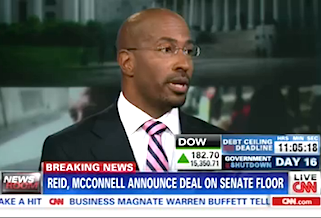 In light of a deal struck by Senate leaders to reopen the government and avoid default on the country’s debt, CNN’s Van Jones cheered what he viewed as a “humiliating defeat” for Sen. Ted Cruz (R-TX) who expressed his dissatisfaction with the compromise, while saying he would not take steps to block it.

Jones appeared on CNN shortly after the Senate announcement along with his Crossfire co-host Newt Gingrich. Wolf Blitzer began by asking the former Speaker of the House if he would have voted for this legislation if he were still in Congress. “I have no idea,” Gingrich said, explaining that he would need to see the fine print on the bill before making an assessment.

Van Jones, meanwhile, hailed the bill as a “big deal” that could ultimately affirm the “governability of the United States.” He praised “heroes” who worked behind the scenes like Sen. Amy Klobuchar (D-MN) in contrast to Cruz, who “went down to a humiliating defeat today as he deserved.”

But for Gingrich, today is a “very sad day” for America, “because the president adopted a strategy of vilifying his opponents and refusing to negotiate and it worked.” Without “fixing” the Affordable Care Act or entitlements, Gingrich said we were just “kicking the can down the road.”

Jones summed up his point like this: “Nobody wins today, but Ted Cruz loses today.”