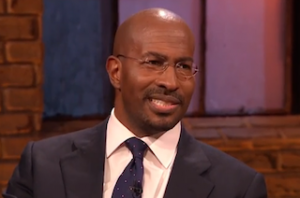 Van Jones is less than three weeks into his new gig as co-host of CNN’s Crossfire, but he already knows what makes it better than similar talking head shows on rival networks Fox News and MSNBC. During an interview with late night host W. Kamau Bell on FXX’s Totally Biased, Jones summed up what he views as the show’s major strength and offered some extensive praise for conservative co-hosts Newt Gingrich and S.E. Cupp.

“First of all, are you afraid Jon Stewart’s going to cancel it like he did last time?” Bell asked Jones, referring the The Daily Show host’s infamous appearance on the original iteration of the show.

Jones challenged Stewart to show up and tell the show to “Stop hurting America,” as he did the last time, saying, “That’s how you know there was no diversity on that show, because he wouldn’t come up on my show talking like that.”

Jones then diagnosed what he thinks is wrong with CNN’s cable news competitors, without explicitly referring to them by name:

Watch video below, via FXX: