Van Jones Hits White House For ‘Sit Down, Shut Up, We’ll Take Care Of It’ Attitude On Chris Hayes Panel 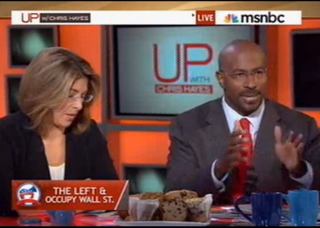 Former White House “green jobs czar” turned Glenn Beck frienemy Van Jones has recently reemerged calling for the left to take notes from the populist uprisings America saw with the Tea Party movement, so it was no surprise that he expressed approval of the Occupy Wall Street movement this morning on Up with Chris Hayes. What was somewhat surprising, however, was his insistence in viewing the protests through a prism of failure on the left, and not on the right, with the way the nation was being governed.

Host Chris Hayes opened the segment with a clip of comic George Carlin arguing that both parties were inherently the same by virtue of being corporatist, a sentiment that he saw reflected in the Occupy Wall Street protesters that somewhat concerned him. “I worry you end up in a place of political nihilism in this respect,” he noted, though suggesting that “this is a very familiar American attitude” and nothing new. That said, he suggested the attitude would “let people off the hook” by putting all politicians on the same level.

Jones saw the cause for concern, but noted that, to him, it did not undermine the message that the game was broken, and not just the players. Comparing the protests to a “bad report card” a child would get, “you could say ‘the teacher doesn’t like me,'” but that wouldn’t change the failings. Despite having a majority and “the best Speaker ever” in now Minority Leader Nancy Pelosi, Jones argued Democrats were “stuck on stupid for months now as the pain threshold has gotten worse,” and that wasn’t exclusively the province of Republicans. Hayes countered that “the path of least resistance was to do nothing” with much legislation, and yet Democrats had “expended tremendous amounts of political capital” on the stimulus package and “Obamacare” that demonstrated and effort to make the system work. Jones did not see the solution to the problem, however, as possible from Washington. While mostly supportive of the protests, particularly given that they were the first major left-wing political expressions of their kind in some years, no one on the panel objected to poking a little fun at the “hugs,” “drum circles,” and “tofu” at the event.

RELATED: Van Jones: Budget Talks Are Stuck Because ‘A Small Number Of Extremists Hijacked The Base’

“We didn’t mobilize the people,” he responded, adding that “what made a difference in America is what you see right now… we spent two and a half years where the only people who marched and protested in America were the right wing.” This silence he attributed directly to the White House. “There was a sense from the administration that you need to sit down, shut up, and we’ll take care of it.” The Occupy Wall Street movement, he concluded, was simply the pendulum swinging to the other side after years of this mentality. Fellow panelist Naomi Klein of The Nation had an alternate explanation to that silence, however– the nation’s “obsession with electoral politics” that made potential protesters wait to make their voices heard at election booths without trying to sway the votes of others.