Van Jones: Libertarianism An ‘Extreme Ideology That Would Spit In The Face Of Dr. King’
video

Van Jones: Libertarianism An ‘Extreme Ideology That Would Spit In The Face Of Dr. King’ 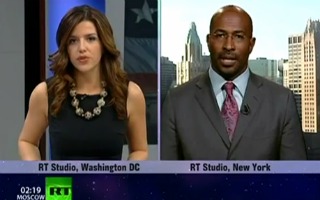 Former White House advisor Van Jones has been taking significant criticism after he accused libertarians of harboring racist and homophobic sentiments. But rather than clarify his remarks, Jones appeared on Russia Today network on Monday to double down on his criticisms of the libertarian movement saying “You can’t call yourself a patriot and adopt an extreme ideology that would spit in the face of Dr. King.”

When asked if he was inviting criticism by saying that libertarians “hate the people, the brown folk, the gays, the lesbians, the people with piercings and tatoos.”

“I think we have to start punching back—fighting back,” said Jones. “If you can’t take it don’t dish it out.”

Jones conceded that the statement he made was “overly broad,” but defended his comments saying “that’s American politics. We mix it up.”

“I think a lot of people on the American left are tired of certain section people acting like they have the monopoly on patriotism,” said Jones. “They don’t. And they’re the ones who challenge our patriotism. Well, now, I’m saying two can play that game.”

“I’ve met libertarians who say that Dr. Martin Luther King—Dr. King—is someone they can’t support because someone should have the right to exclude people in this country from being able to go into a restaurant or go into a hotel or go into a business solely based on the color of their skin,” said Jones. “You can’t call yourself a patriot and adopt an extreme ideology that would spit in the face of Dr. King.”

Watch the exchange below via Russia Today: