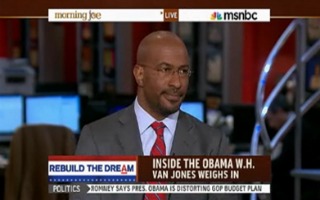 Former White House Advisor Van Jones appeared on MSNBC’s Morning Joe on Friday, where he was sharply critical of President Obama’s administration. Among other criticisms, he called the party that Obama leads a “post-hope Democratic party.”

In promoting an upcoming book, Jones described to the hosts on Morning Joe his transformation from a “White House insider” back to a “grassroots outsider” and how his view of the Obama presidency has changed accordingly.

“We went from ‘hopey’ to mopey,” said Jones of the broader electorate after 2008. Co-host Mika Brzezinski stopped Jones’ jovial characterization in its tracks. “There’s a lot to mope about,” she said mirthlessly. “It was a hopeful time but then it became a very difficult time for many Americans.”

Jones did not lay the blame for his party’s dissipated enthusiasm squarely at the feet of the president. He said that Obama cannot be both the President of the United States and, equally, a social movement leader in the same way that “LBJ did not lead the civil rights movement.”