Van Jones: Success Of Occupy Wall Street Is ‘A Movement That Washington Has To Chase’ 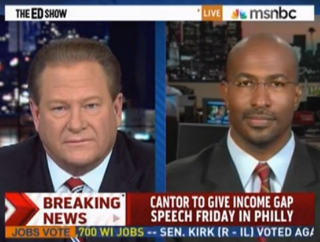 As the Occupy Wall Street protests turn one month old today, progressives are making the rounds to call on those in government to listen to their demands. On tonight’s Ed Show, Van Jones, who has experienced somewhat of a resurgence with this movement, argued that the movement was growing in political significance, citing Rep. Eric Cantor‘s recent comments on income inequality were proof “the ice is cracking all around the Republican Party.”

Jones told host Ed Schultz he felt extremely optimistic about the situation. “When you have someone like Eric Cantor pretending he cares about income inequality,” he argued, “you know this movement has broken through in a big way.” The message, which he defined as “get your boot off the neck of the American people,” was a familiar one to progressives, but one that had been elusive to those in power, and near impossible to convey for progressive activists. “For so long, progressives tried to build movements that tried to chase the White House,” Jones explained, which meant they were routinely ignored. Unlike those, Jones saw in this movement the potential for development. “This movement is a movement that Washington to chase,” he told Schultz, and instead of being concerned about the movement being co-opted by Democrats, he concluded, “we should let the spirit of this movement co-opt the Democratic Party, the Republican Party, and the whole country; it’s the best thing in America right now.”