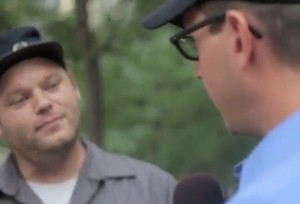 The New York Observer‘s Drew Grant (formerly of Mediaite) is reporting on a YouTube clip that shows an Occupy Wall Street protester peppering Fox News’ Griff Jenkins with criticism of the network, in an interview that was never aired. Why the clip didn’t air is the subject of some speculation, but according to Greta Van Susteren, the simplest explanation is the right one.

Jenkins does, at one point, responds to criticism of the network by saying, “Alright, fair enough. You have a voice, an important reason to criticize myself, my company and anyone else.”

The video, according to Grant, features Jesse LaGreca, a “vocal member of the Occupy Wall Street protests,” and was shot by Kyle Christopher from OccupyWallSt.org‘s media team. The Observer also has a transcript:

The implication here is that Fox News cut the interview, for Greta Van Susteren‘s On The Record, because it contained some sharp criticism of the network. The criticism to which Jenkins replied “Fair enough,” though, is one that Fox chief Roger Ailes also acknowledged in a recent Newsweek profile: that Glenn Beck’s inflammatory rhetoric was a problem (Ailes called it a “branding issue”). Such a (heavily qualified) acknowledgement by Jenkins isn’t all that earth-shattering, in that context.

Perhaps more problematic was the protester’s invocation of a DOJ investigation of News Corp, but not just because it’s a touchy subject. Dropping a mention of something like that, which is difficult to properly contextualize in an unrelated interview, is reasonable grounds to cut it. Similarly, it may be lots of fun to chant “F*ck Fox News!” but that’s also a way to not get on the TV.

Greta Van Susteren tells Mediaite that the choice had more to do with the volume, and relevance, of the footage taken. “Griff Jenkins spent about 3 hours with the protesters,” she told me via email. “The resulting hour of footage was edited down to a 2 minute package about the economic issues that prompted the Occupy Wall Street protests.”

All in all, I’d say this encounter went pretty well for Griff Jenkins, a whole lot better than the first time I met him. At the 2008 Democratic convention in Denver, Jenkins got into a shoving match with another journalist while trying to score an interview with activist Ward Churchill, then was later attacked, along with his crew, by “Recreate ’68” protesters: