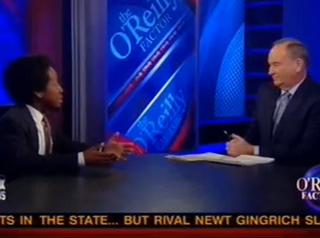 While the Occupy movement is mostly subdued in the various places it awoke in the rest of the country, the protesters at Occupy Oakland, partially motivated by historic local tensions with police there, are clashing with police in the streets, and on The O’Reilly Factor last night, host Bill O’Reilly discussed the potential good that can come from these protests with guests, who did not manage to convince him to embrace the movement.

RELATED: Bill O’Reilly And Geraldo Rivera Clash On The War On Poverty

O’Reilly gave a short summary and added that he believed any protests in Oakland this weekend will end in violence just as they did last week. He asked civil rights lawyer Joe Alioto Verenese what he thought the Occupiers were looking for out of these protests. Verenese explained that “This is a faction of the Oscar Grant group that’s extremely upset” and that they were not actually Occupy movement people, but “hijacking the name of the Occupy group.”

Rich Benjamin of the think tank Demos replied that he believed there was still much merit in the ideas of Occupy, and that “we cannot let their activities detract from what Occupy Wall Street represents.” O’Reilly thought it was too late, but Benjamin insisted that this was not a “popularity contest” and that “when you challenge power in this country, you may get a billy club in your face, it gets ugly.” O’Reilly replied that he had been doing so for years and never got violent, while Verenese insisted that it was unfair to victims of real crimes for police to be distracted by protesters and arrive to crime scenes late “because they are babysitting criminals.” For Benjamin, it was yet another exercise of America’s “vibrant, messy democracy.”