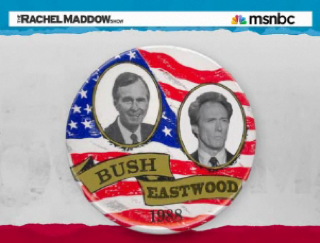 Vice President Dan Quayle may look like a bit of a joke now, but he was the safe bet of his era– and what he was chosen over is quite the shocking revelation. In what will go down as one of the greatest “what ifs” of history, somewhere up there with Rod Blagojevich considering giving President Barack Obama‘s former Senate seat to Oprah Winfrey, it was revealed this week that, facing a dilemma not unlike the one before Sen. John McCain in 2008, the 1988 George H.W. Bush campaign considered Clint Eastwood as a potential Vice Presidential candidate. And Rachel Maddow is delighted.

RELATED: Barbara To George H.W. Bush After He Tears Up: “You Could Be Speaker Of The House!”

In her “Best New Thing In The World” segment last night, Maddow gave the details of the mindblowing possibility that Eastwood could have been a legitimate political contender. According to a recent interview with Bush Secretary of State James Baker, the campaign needed to breathe some life into the race, and had little to choose from at the time. Torn between candidates like Bob Dole and Jack Kemp (who, strangely enough, became the 1996 Republican ticket), Bush had to choose between safe bets and wild cards. Given that he ended up with Quayle, remembered today for not knowing how to spell “potato” and siring Tea Party Congressman Ben Quayle, he chose the safe bet, but over whom? We now know, much to Maddow’s delight, that Clint Eastwood was, according to Baker, “suggested in a not-at-all together unserious way.” Eastwood was a mayor at the time and, given that Bush had served eight years under an actor himself, not entirely out of step with the thinking of the party at the time.