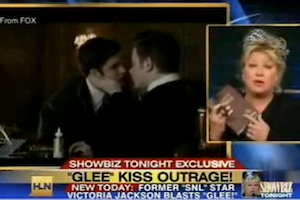 Recently, former SNL cast member and Tea Party anthem singer Victoria Jackson was appalled that this week’s episode of Glee featured two gay characters locking lips. She took to the Internet, writing a blistering post on WorldNetDaily.com in which she called the kiss “sickening.” The folks at HLN read between the lines of that post and were able to translate it as “Someone please put me in front of television cameras right now!” and so Jackson appeared on Showbiz Tonight where she was asked about what she wrote. An great opportunity was missed, however, as the the question I’ve been wondering all day was never broached; Why the heck would someone who hates seeing gay stuff on TV be watching the latest episode of Glee?

While Brooke Anderson tried her hardest to keep the interview focused on Glee (this was Showbiz Tonight after all), Jackson had bigger fish to fry. She waved around and quoted from a Bible, talked about how the “Liberal agenda” was stealing the childhood innocence from our nation’s children, and wondered how the Left could support Muslims and gays when Muslims kill gays. Fortunately, she was able to answer her own question by pointing out that they both hate God. Oh, of course.

However, the most entertaining part of the segment came from the decision by the HLN producers to put Jackson in split screen and play the gay kiss over and over again right next to her, thus making her part of the gayest segment ever to air on television since Showtime’s last Queer as Folk marathon. Jackson, for her part, squeezed her eyes shut when Anderson said they were going to air the clip. That’s always a good sign that we’re about to see a super adult conversation.

Watch the clip from HLN below: