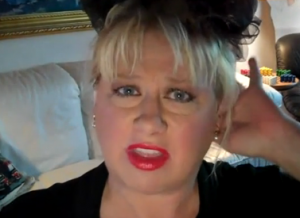 Victoria Jackson, a former Saturday Night Live cast member, is blasting Glee, calling the show “sickening” after last week’s episode, which included a kiss between two gay characters.
In a post on conservative blog WorldNetDaily.com, Jackson says the show “made a mockery of Christians.”

The column, “The Muslims Next Door,” begins with the line “frankly, I’m afraid to say anything about Muslims. Why? Because they kill people.” And then she proceeds to say a lot about Muslims, Glee, progressives and even CBS Evening News anchor Katie Couric, suggesting they all share a single objective:

Because they have the same goals. Progressives, communists, liberals, globalists and Muslims want to destroy America. When that goal is reached, they will fight for top billing. It will be bloody.

A discussion of suicide bombers and al-Qaida leads Jackson back to Glee and same sex marriage:

That is as ridiculous as two men kissing on the mouth! And I don’t care what is politically correct. Everyone knows that two men on a wedding cake is a comedy skit, not an “alternate lifestyle”! There I said it! Ridiculous!

Did you see “Glee” this week? Sickening! And, besides shoving the gay thing down our throats, they made a mockery of Christians – again! I wonder what their agenda is? Hey, producers of “Glee” – what’s your agenda? One-way tolerance?