Victoria Jackson Goes Off The Rails On O’Reilly: First Thing Communists Do Is They Kill The Christians 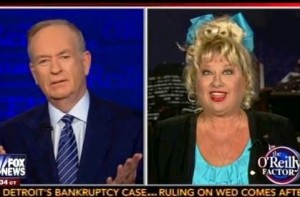 Victoria Jackson used to be a featured player on Saturday Night Live, now she’s actively involved in tea party politics. Bill O’Reilly asked her about her political transformation in an interview that bizarrely ended up being mostly about how much she hates communism. She talked about being on SNL during the Reagan years, and somehow went from that to declaring that communists come for the Christians first.

Jackson told O’Reilly she wasn’t political when she worked on SNL, but her Christian faith got some mean comments “’cause they kind of hated God.” She said she was educated by a conservative group a few years ago about how “socialist” Hillary Clinton was being challenged by “communist” Barack Obama in the presidential election. She said the communists would never take over the U.S. by force thanks to the Second Amendment, but they’re already corrupting the country through a “sex, drugs, and rock ‘n roll morality.”

When O’Reilly asked her about her conservative turn not helping her career, Jackson said, “No one’s gonna have a career when we’re all communists.” She called tea partiers the “greatest people I’ve ever met,” and expressed some concern about what’s going to happen to her soon.

“I’m gonna die soon, because the first thing they do is they kill the Christians or persecute them or jail them.”

O’Reilly doubted the country is heading there any time soon, but admitted he’d love to see Jackson debate Roseanne.