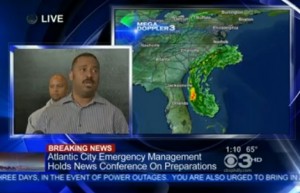 Hurricane Sandy brought out the best in some people, like the lady at Radio Shack who paid $45.00 for an old man’s emergency supplies when his credit card declined Sunday morning, and the worst in others. From what New Jersey Gov. Chris Christie tells me, Atlantic City Mayor Lorenzo Langford is among the villains of this storm because he “urged people to stay in shelters in the city,” rather than evacuate. Even though only a truly horrible person would lie about something like that, I had to see this heinous act of irresponsibility for myself, and now, so can you.

At a press conference on Sunday, New Jersey Governor Chris Christie tore into Atlantic City Mayor Lorenzo Langford, repeatedly accusing him of telling residents not to evacuate. “We’re at the moment now when evacuations are no longer possible, and we’re no longer able to come and rescue people,”Christie said. “This has become particularly problematic in Atlantic City, where for whatever reason, Mayor Langford urged people to stay in shelters in the city. Despite my admonition to evacuate, he gave them comfort, for some reason, to stay.”

Christie went on to say that Mayor Langford, “in his initial conversations with the public, told them he didn’t want his people leaving Atlantic City.”

We bring you, now, to Saturday’s press conference, at which Atlantic City Chief of Emergency Management Tom Foley is warming up the crowd for Mayor Langford’s doom-sealing order for people not to evacuate:

In case you missed it, that was Mayor Langford who said “It’s important for people to understand, in the event that we get these tidal surges, you may have a certain amount of water that makes it physically impossible for emergency personnel to get to you. So, that’s why it’s very prudent for people to take this… to heed this advice and to get out of the city, if you can, because, you know, 3 feet, 4 feet of water in the city will disable a lot of our vehicles and we will not be able to respond even if we wanted to. Tom is right, given the dedication of the men and women that comprise our fire and police departments, they’re going to do all that they can putting themselves in harms are way. We don’t want that to happen, either. So, in some cases, it could prove to be physically impossible to get to people depending on what happens. So, we want our residents to take every precaution to get out of town if they can.”

So Chris Christie is a big, fat liar, by which I mean a guy who tells big, fat lies. What’s Gov. Christie’s real beef, aside from his running feud with Mayor Langford and other urban leaders? Part of it is obviously umbrage at a perceived failure to respect Gov. Christie’s authoritah, but the broader disconnect has to do with this pervasive notion, among conservatives, that even the most basic, piddling form of government assistance amounts to an enticement for all the poors. People who refused to leave Atlantic City did so because of Langford’s cushy shelters, and not for a raft of other complex, human reasons, up to and including just not being able to, just falling through the cracks. This line of “reasoning” is evident throughout conservative politics, as if we could end fires by getting rid of all those firefighters, denying people the comfort to start fires.

Christie mentioned not being able to “in good conscience, send rescuers in as the storm is about to hit,” but his conscience does allow him to slam doors in the faces of people who didn’t get out. It’s easy for people like Gov. Christie to sit in judgment of people who maybe waited until the last minute because they couldn’t bear to leave their entire lives to be crushed by the storm, or who had little confidence that there was a better place for them to go, or even those who acted out of foolish obstinacy, because Chris Christie can replace whatever he loses, Chris Christie will always have a place to go, and Chris Christie has the power to enforce his own stubbornness. Mayor Langford may be due criticism for some things, but his refusal to turn his back on people, even poor or foolish people, isn’t one of them.