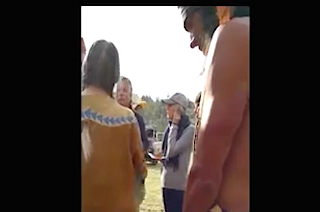 Last week, about a dozen Native American actors made news when they walked off the set of Adam Sandler’s Netflix comedy film The Ridiculous Six after complaints about “racist” jokes in the script were met with indifference. Now, cell phone video captured by one of those actors, Goldie Tom, has emerged, and it shows a producer telling them, “if you are overly sensitive about it… then you should probably leave.”

In the video, the actors make their case against the “disrespectful” nature of the script, which includes female characters with names like “Beaver’s Breath” and “No Bra.”

Last week, Gawker obtained excerpts from an early version of the script, which included the even-more offensively named character, “Sits-on-Face.” In one exchange, the character Will Patch, played by former Saturday Night Live cast member Will Forte tells “Sits-on-Face,” “Say honey: how bout after this we go somewhere and I put my peepee in your teepee?”

So far, Netflix has stood by its short defense of the film, which reads, “The movie has ridiculous in the title for a reason: because it is ridiculous. It is a broad satire of Western movies and the stereotypes they popularized, featuring a diverse cast that is not only part of — but in on — the joke.”