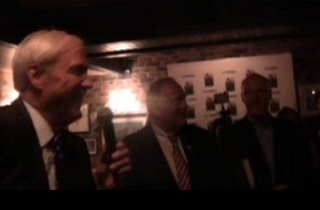 MSNBC President Phil Griffin hosted a launch party, Wednesday night, for Hardball host Chris Matthews‘ new book  Tip and the Gipper: When Politics Worked. Following a toast by Griffin, Matthews delivered several minutes of off-the-cuff remarks, including a riff on new MSNBC host Ronan Farrow‘s parentage. He told the crowd that he was “trying to figure out who the father is,” and put Ronan on the spot by announcing “he’s gonna tell us who his dad was.”

Griffin began by telling the assembled guests that Matthews has “the best gut in politics,” and added that when he was a producer on Hardball, they would pepper Matthews with questions before the show, “get him mad, get him angry, and all this knowledge would come out of his gut, and he’d get angry and spit it out. He was like a boxer before a match, before getting in the ring.”

Phil also pumped Hardball‘s ratings since the move to 7 pm exclusively, which he said were “up by 45%, and often beating Fox News at 7 o’clock.”

Matthews chimed in “Last night, we had 1.2 million, not that we’re counting,” and added “Almost a network number, actually, last night.”

When Griffin handed over the mic, Matthews began his trademark caffeinated riffing, with intermittent thanks to folks in the room, including Dan Rather, who joined him at the mic. Former Pennsylvania Gov. Ed Rendell and Comcast exec Steve Burke also gave brief remarks, but it was Matthews who owned the room. He gave a shout-out to son Thomas Matthews, who stars in HBO’s The Newsroom, and complimented the “best executive producers in the business.”

“And they’re all different,” Matthews said. “When people come up to me and say ‘I watch MSNBC all day.’ You do? All day? You like me and who else? All these weird combinations. ‘I like you and Reverend Al.’ You do? That’s interracial, I get that, sort of.”

Matthews then turned to Ronan Farrow, saying “I actually almost got some news today, I was trying to figure out who the father is, Ronan’s father is today, and he’s gonna tell us who his dad was, huh?”

“You’re always busting my chops,” Farrow said, to laughter from the room.

“You’re now called ‘Young Blue Eyes,’ do you know that?” Matthews said, then added “This is Hardball.”

Ronan Farrow is the son of Mia Farrow and Woody Allen, but has been the subject of rumors that legendary crooner Frank Sinatra is actually his father. In an interview with The Hollywood Reporter Wednesday, Farrow called the rumors “an annoyance.”