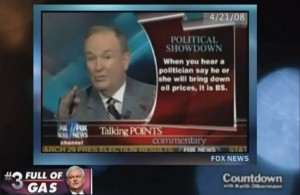 Former House Speaker Newt Gingrich has been trying to revive his flagging campaign with the promise of $2.50-a-gallon gasoline, while other Republicans have tried to attack President Obama over rising gas prices. The President has handled these attacks pretty well, but it’s nice to see him getting an assist from the folks over at Fox News, who echoed President Obama’s responses to gas price politics…three years before he gave them. Countdown’s Keith Olbermann has the video, including Bill O’Reilly‘s eerily similar remarks to President Obama’s, but in defense of President George W. Bush.

President Obama’s mockery of the Republicans’ “3 point plan” for cheaper gas has become a regular part of his campaign speech, and people seem to get it. What they may not get is that the President’s philosophy on gasoline politics has been remarkably consistent. When then-Senators John McCain and Hillary Clinton tried to score points in 2008 by offering a gas tax holiday that would have gutted highway funding and done nothing to bring gas prices down, then-Senator Obama wouldn’t play along, and people got it then, too.

On last night’s Countdown, host Keith Olbermann played a piece of the President’s recent remarks on gas prices, in which he told a North Carolina crowd “The next time you hear some politician trotting out some 3-point plan for $2 gas, you let them know, we know better. Tell them we’re tired of hearing phony election-year promises that never come about.”

He then took Fox News into the wayback machine, back to the summer of 2008, when gas prices were higher than they are now, well over $4 a gallon. Among the clips of Fox News personalities dealing out the harsh reality that presidents can’t control oil prices was Bill O’Reilly’s scarily similar response to the President’s. “The next time you hear a politician say that he or she will bring down oil prices, understand it’s complete BS…We need a strong leader who’s honest, smart, courageous, and willing to explain dubious associations.”

In 2012, of course, Fox News is asking “why isn’t anybody talking about gas prices?” while seeming to have forgotten everything it learned when President George W. Bush was in office, and gas prices were higher.

Olbermann also interviewed Sen. Bernie Sanders (I-VT), who urged the President to get the CFTC chairman to crack down on oil futures speculation, which actually could have an effect on gas prices. There’s a provision in the Dodd-Frank Financial Reform law that requires him to do just that, but it has yet to be enforced.