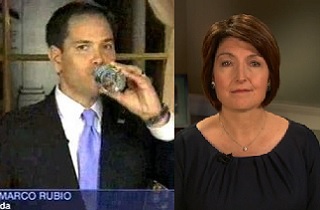 The most memorable thing about last year’s Republican response to the State of the Union address, and perhaps of any SOTU response ever, was Sen. Marco Rubio‘s (R-FL) comical battle for hydration. Rather than place a hilariously tiny bottle of water just offscreen for this year’s response by Rep. Cathy McMorris Rodgers (R-WA), or, say, just putting a glass of water on a coffee table next to her, the GOP’s plan appears to have been not to have any water anywhere, at all. Here’s how that worked out:

Now, before Republicans decide that next year’s solution should be to use less sensitive microphones, or to wrap the respondent’s throat in a sound-muffling ascot, could we all agree that a ready, visible source of hydration needn’t be a speech-ruining distraction? The President spoke for over an hour with a glass of water inches behind his head, and no disaster befell him. Granted , he gets to give his speech in a large, open chamber, while the response has been given, of late, from cramped hotbox TV sets, which is all the more reason to provide liquid relief. For the love of all that is American and good, let them drink! We all are!

Maybe next year’s response should be delivered from a barstool. At least then, they’re guaranteed lots of press around to cover it.

If Michele Bachmann‘s “you lookin’ at me?” wrong-camera SOTU response is more your speed, the GOP’s webcast of McMorris Rodgers’ speech also had you covered last night, as they apparently haven’t mastered the integrated feed. Enjoy: