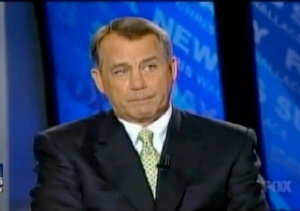 Even as the ink is still drying on the “fiscal cliff” deal, Republicans are gearing up for several other upcoming deadlines, including the looming debt ceiling, which they promise not to raise unless they can extract political concessions from President Obama. Failure to raise the debt ceiling carries dire consequences, and in case anyone is under the impression that Republicans are unaware of those consequences, or don’t believe they are serious, ThinkProgress has flagged a Fox News Sunday interview in which Republican Speaker of the House John Boehner makes those consequences crystal clear, telling Chris Wallace that a government default “would be a financial disaster, not only for us, but for the worldwide economy.”

The debt ceiling is the mechanism by which congress authorizes the government to borrow money that congress has already spent. It’s not a “blank check,” or some license to spend, it’s just the final dotted “i” on the money that congress has already spent. In 2011, congress threatened to allow the government to default, and got close enough to doing it that the U.S. government suffered its first credit downgrade in history. A second such episode could plunge the entire world into a global financial disaster.

While it’s important for people to understand that John Boehner knows exactly what kind of fire he’s playing with, perhaps an even more important takeaway from this interview is the fact that Boehner weirdly insists that he’s not playing with it. He tells Wallace that Republicans won’t raise the debt ceiling without concessions from the President, which would have resulted in a government default, but then says that a default “would be a financial disaster, not only for us, but for the worldwide economy,” and that he doesn’t think a default is “even on the table.”

What Boehner is saying, essentially, is “I will shoot this hostage if the President doesn’t give me what I want, which would kill this hostage, but I don’t think killing this hostage is on the table.”

In real life, such a person wouldn’t be put in charge of anything, he’d be put in a padded cell.

President Obama has promised not to allow Republicans to hold the nation hostage once again, but he hasn’t said how. If he thinks Republicans won’t do it, he may be right, but no one can pretend that they don’t know what they’re doing, and what they are risking. However this fight ends up, Americans should be looking ahead to 2014, their next chance to take out this threat once and for all.