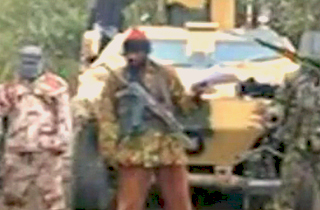 In a video released Monday, Boko Haram leader Abubakar Shekau claimed credit for the kidnapping of more than 200 Nigerian schoolgirls, and announced plans to sell them on the market.

According to Agence France-Presse, Shekau announced, “I abducted your girls,” and, “I will sell them in the market, by Allah. …God instructed me to sell them, they are his properties and I will carry out his instructions.” Shekau attributed the outrage over his group’s crime to the fact that “we are holding people [as] slaves,” which seems pretty dead on.

In the grainy video, which AFP has not made available yet, Shekau is seen dressed in fatigues and standing before an armored vehicle, gesticulating wildly as he reads from sheets of paper.

RELATED: Gwen Ifill Has a List of Stories to Focus on Instead of Benghazi

At least 223 Nigerian girls were kidnapped from the Government Girls Secondary School in Chibok three weeks ago; the Islamic militant group Boko Haram, which opposes Western-style education of women, was suspected of perpetrating the act, but until today had not claimed credit. Some girls are feared to have already been sold as brides in Chad and Cameroon.

Pressure both domestically and abroad has been mounting for the Nigerian government to more actively seek the girls’ return, especially after first lady Patience Jonathan suggested the abductions might have been fabricated as a plot against the president.

Watch an Al Jazeera America report on the video below: