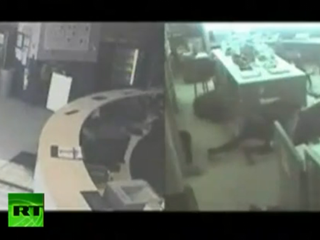 Detroit police have released a surveillance video of a violent gun attack on a precinct station in the city in which four officers were wounded and the gunman and one other officer died. The video shows the gunman entering the station and firing shots over the front desk where several officers are waiting, and, eventually, the shootout with a police commander that likely left him dead.

The attack occurred on Friday and police have yet to identify the motive behind shooter Lamar Moore‘s rampage. Moore enters the building and pulls a shotgun, aiming down a hallway before hopping over the front desk and engaging in a gunfight with the officers stationed there. This continues until Commander Brian Davis comes to the aid of his fellow officers and engages the shooter directly. Moore did not stop attacking until an ultimately lethal shot brings him to the floor. Did not not make it to the hospital.

The video is as disturbing as it is spectacular for, the way Police Chief Ralph Godbee put it, the “tremendous acts of heroism” of his officers. The video was not released until officials within the police department watched it in its entirety, after which the department felt it important for the public to see the officers’ work.

As for previous police interaction, the NY Daily News reports that the home in which Moore was staying caught fire and is suspected for arson sometime after police officers made a visit. The disturbing footage below: