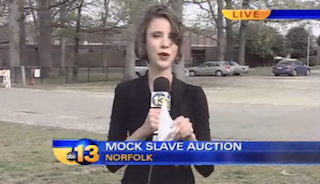 Just as there are infinite different types of young people out there, there are infinite different methods of teaching. You can be very stern and strict or extremely supportive and kind or you can even have tense stare-downs with Coolio. One of the most effective ways, however, is to have the students see and experience something firsthand. For some topics though, this can get a teacher in trouble. Like the Northwestern professor who showed his class a live sex demonstration or this most recent story about a fourth grade teacher who called up her non-white students, had them stand on a stage, and held a “mock slave auction.”

It could be worse, of course. She was trying to get them to experience the Civil War. She could have given them all gangrene.

The incident took place in Norfolk, Virginia. WVEC News has the lowdown:

“A letter to parents with children at Sewells Point Elementary School was sent home last week, following the April 1 incident.
Officials say teacher Jessica Boyle separated black and mixed-race students from their white peers and then put them up for sale.
The letter from Principal Mary B. Wrushen says, in part, ‘Although her actions were well intended to meet the instructional objectives, the activity presented was inappropriate for the students.'”

Now, I’m going to take a potentially unpopular stance here and defend Boyle. I obviously don’t know what went down in the classroom but, in theory, this isn’t the worst idea in the world. Let me explain.

Take, for example, the Holocaust Museum in Washington DC. They have a tour where each guest selects a card with a real person’s name on it. They follow this person’s story throughout and, at the end, they learn whether their person (which the guest is relating to at this point) dies. Just like that.

Is this pleasant? No. However, if you talk to someone who went to that museum when they were young, they instantly remember their visit. It is an incredibly effective way of getting young people to truly understand the unthinkable. I’m sure Boyle was trying to give her class a similar experience.

Now, it’s in execution that Boyle really slipped up. The obvious problem is that she actually separated the kids by race. Had she just chosen a group at random and told them they were now the “slaves,” I doubt we’d ever hear about this story. But, since a white teacher actually set aside her black students, there’s no way this wasn’t going to cause a problem. Some things you just don’t do and any person, especially a teacher, should know better.

However, while I don’t know the woman and wasn’t there, I want to assume her heart was probably in the right place. While slavery of different kinds still exist to this day (just ask…uh…Demi Moore and Ashton Kutcher), it’s hard for anyone, especially children, to imagine a time where human beings were brought up and sold right in the middle of Main Street. And some kudos should be given to teachers like Boyle and the Northwestern professor for attempting to teach difficult concepts in a way that is interesting and unique enough to steal attention away from the kids’ iPhones. Next time, both educators should probably pass their lesson plans by the administration first, though.

Anyway, happy 150th anniversary of the Civil War, everyone!

Check out a news report on the story from WVEC below: