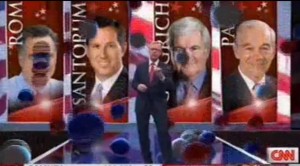 In the endless battle between sizzle and steak, there’s no rule that says you can’t have ample quantities of both, but CNN has developed a reputation for serving up billowing skillets of gimmickry with its election coverage. From the historic 2008 Election Night appearance of a holographic Will.i.am, to the phallic Weebles of this year’s Iowa caucus, to the cube-containing mothership of a studio, CNN is relentless in its quest to glue your eyeballs to their election coverage. Tuesday night’s innovation: the “Virtual Convention.”

Flipping back and forth during last night’s Super Tuesday coverage was instructive. While MSNBC also has the Minority Report-style touch-screen gizmos that have become ubiquitous with this kind of coverage, the emphasis of the coverage was on a stream of commentary and analysis from their primetime hosts, plus political director Chuck Todd and experts like former McCain adviser Steve Schmidt and former RNC Chair Michael Steele. If Rachel Maddow, Ed Schultz and Lawrence O’Donnell aren’t your cup of tea, there’s not much else to glue you to them (everybody has maps), but if they are, there you are.

CNN also had an extensive panel of commentators, like Democratic strategist Donna Brazile and Alex Castellanos. In fact, there were a lot of them, but they were just part of the buffet. Much of the time was spent slicing and dicing the numbers from Ohio counties (again with a whiz-bang touchscreen map), and they distinguished themselves by being the first to report vote totals from various counties in the hotly-contested state. Then, there were the now-infamous trips to “The Cube” to visit political Director Mark Preston.

Finally, there was Tom Foreman‘s forays into the “Virtual Convention,” a computer-generated mockup of the 2012 Republican Convention in Tampa, complete with swooping cameras and virtual banners and balloons, that was, essentially, a high-tech stand-in for a cork board and pushpins. The whole point, if there was one, was to freeze you in your seat like a tractor beam. Here’s the clip, from CNN:

As is frequently the case, Wolf Blitzer seems to recognize the silliness of it all, coming out of the clip deadpanning, “Tom Foreman with the virtual balloons.”

There’s nothing wrong with snazzing up election night coverage with some flashy gee-whiz stuff because, let’s face it, we in the media are all pretty much having the same conversations, filling and killing the same time. I actually like the THX-1138-meets-Avatar ethos of CNN’s set design and graphical flourishes (although they do seem to roll them out before they’ve figured out how to integrate them). But the cumulative effect is just too much.

The biggest difference between CNN’s and MSNBC’s election coverage is that MSNBC really seems to know who they are. They have a point of view, yes, but the analysis is smart, they include conservative voices, and particularly in a primary, an outsider can distill truths that others might miss. Plus, they’ve got a crack political pro in Chuck Todd to give canny, unbiased analysis.

CNN’s strength, aside from creating virtual bulletin boards, is still their reporting, their ability to get stuff first. That strength is tough to stretch out over five hours of primary coverage, but they’ve also got a strong slate of political panelists, and their own political whiz in Mark Preston. Yes, the gizmos are cool, but does the whole thing have to play like a Transformers sequel? It’s exhausting to watch. They’re constantly at 11, when they ought to be at 6 or 7.

Of course, not everyone watches election night coverage the way I do. I’ve always preferred to park it in one place, so I can not only follow the results, but also the conversations. Maybe the flashy, over-the-top presentation attracts people who channel-surf on election night, or watch returns at their favorite watering hole. CNN’s hyper-visual style probably works well for them.