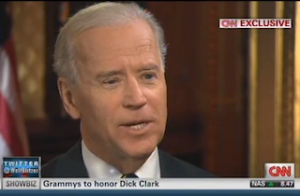 CNN’s Gloria Borger scored the first post-inauguration interview with Vice President Joe Biden today and the reporter got him to open up a bit about his relationship with President Obama over these last four years and moving forward.

Discussing his recently-cemented role as deal-maker with Congress, Biden emphasized that he’s always acting on the president’s behalf. “When we got into this deal, we didn’t have what other administrations have had, where the vice president and the president have a different take on the major issues of the day. We’re totally simpatico.”

But of course, there was one major instance where he got out ahead of the president on the issue of gay marriage. Asked about the appearance on Meet The Press last May when he asserted his own support for same-sex marriage, Biden explained that it wasn’t exactly a case of miscommunication. “We sometimes disagreed on tactics as to how to proceed to try to get what he wanted done, which I’ve agreed with, but we’ve never disagreed on policy. And even the so-called discussion about, you know, my saying I was comfortable with gay and lesbians and relationships, I knew his positions.”

As for the aftermath of the incident, if the president was upset with Biden, it didn’t last long. “I walked into the office and he got up, smiled, gave me a big hug and he said, ‘Now, I’ll tell you what, man, that’s one of the things I like about you, you say what’s on your mind.'”

According to the vice president, it’s that honest disposition that has allowed him to form the relationships in Washington with members of both parties that are vital to achieving compromise. “It’s trust. Simple trust. Find a single person, who will look you in the eye and say, ‘I don’t trust Joe Biden.’ It’s just that I’ve been around longer and they know me, but they also know I speak for him. And he will keep whatever commitment I make on his behalf.”