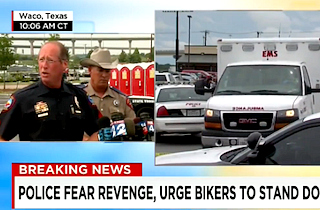 “There was a media outlet that was reporting that law enforcement killed four of the individuals at this scene Sunday afternoon,” Swanton said, via Washington Post’s Erik Wemple. “I will tell you, whoever told you that, that person belongs on CSI because the autopsies have not been completed and it is impossible at this point to determine that fact. I will tell you, is it possible? Yes. Is it a fact? No.”

“The information that is out there right now — if you got lucky and guessed that number, congratulations,” Swanton said. “If you didn’t, shame on you for putting that information out there that may have been incorrect.”

Moments later Banfield defended the network’s reporting. “That’s preliminary information that actually a law enforcement source gave to CNN that four of these people,” she told him. “And by the way, we double-checked it. Once you finished your news conference, we went back to that law enforcement source and that source is standing by that prelim information suggesting that four of those people were killed possibly in a hail of police bullets.”

“The first point that you made was that was a possibility,” Swanton responded. “There are lots of possibilities here. What it’s important that you understand is that’s not fact.”

And here is CNN’s push back: