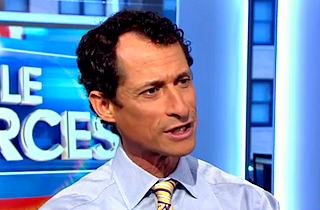 Anthony Weiner — yes, that Anthony Weiner — talked to Reliable Sources host Brian Stelter Sunday morning about Hillary Clinton’s road trip to Iowa in the now infamous Scooby van, which he said bespoke of the unexpected in comparison GOP’s candidate’s staged events, and said the media was focusing on arcane or frivolous details that mattered only to the insider types, not to voters.

Weiner went on to dismiss the “media’s” nitpicking of every detail of the Clinton rollout as insider baseball that will never affect a real voter’s decision.

“If you look at the coverage that arguably mattered the most, the things people were writing about in Iowa, they didn’t care that the guy in the orange pants couldn’t catch up with the truck,” Weiner said. “The campaign is beginning the way I would hope my president would behave, which is: let’s try to figure out the right thing to do to be in touch what Americans care about. That’s the way I want my president to think, as well as a candidate.”