Wait…Was Ted Cruz Advocating for ‘People Dying on the Streets’ Over Obamacare? 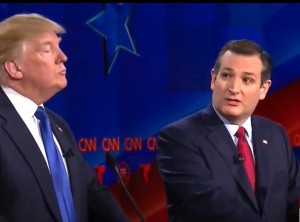 Cruz began by attacking Trump over his past support for universal health care, and directly challenged him for saying “if you want people to die on the streets, if you don’t support socialized health care, you have no heart” (not actually what Trump said, though), but never actually got around to saying that people, indeed, should not be dying in the street. In fact, when Trump reiterated three times that he wouldn’t let people die in the street, the only response Cruz could muster was “Who’s going to pay for it?”:

TRUMP: No, I said it worked in a couple of countries…

CRUZ: But you’ve never stood on this debate stage and says it works great in Canada and Scotland and we should do it here.

CRUZ: Did you say if you want people to die on the streets, if you don’t support socialized health care, you have no heart.

TRUMP: Correct. I will not let people die on the streets if I’m president.

CRUZ: Have you said you’re a liberal on health care?

TRUMP: Excuse me. Let me talk. If people…

TRUMP: If people — my plan is very simple. I will not — we’re going to have private — we are going to have health care, but I will not allow people to die on the sidewalks and the streets of our country if I’m president. You may let it and you may be fine with it…

CRUZ: So does the government pay for everyone’s health care?

TRUMP: … I’m not fine with it. We are going to take those people…

CRUZ: Yes or no. Just answer the question.

CRUZ: Who pays for it?

RUBIO: Well, can I just clarify something?

RUBIO: Wolf, no. I want to clarify something.

BLITZER: Gentlemen please. I want to move on.

RUBIO: This is a Republican debate, right? Because that attack about letting people die in the streets if the government doesn’t support health care? That’s what Democrats say.

Rubio tried to jump in at the end, and may have been about to say that people dying in the street is not okay, but we’ll never know because moderator Wolf Blitzer moved on, which is also kind of messed up. I think the voters deserve a little clarity on the issue of who is or isn’t okay with Americans dying in the street. Cruz didn’t dispute it, and Rubio may have been about to, but was more likely about to deny that anyone in America dies because they don’t have health insurance.

Either way, the real takeaway here is that Donald Trump is somehow the most compassionate person on that stage because he believes in doing literally the very least you can do for the most vulnerable Americans, and not let them die in the street. There’s a bumper sticker for you.