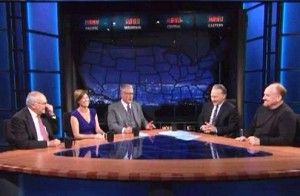 Between talk of testosterone and Jackie Kennedy, Bill Maher brought up the new Sarah Palin biography containing all sorts of odd, politically irrelevant rumors about the former governor’s life. After some initial hesitation, Keith Olbermann surprised himself by defending Palin against the rumors.

Maher brought up the book and said that many reviewers, even at The New York Times, thought Palin got a “raw deal” because of all the unsubstantiated rumors in the book about her alleged one-night stand with an NBA player and snorting cocaine off an oil drum. Olbermann hesitated before daring to speak aloud:

I’m… I’m actually… on Sarah Palin’s… side on this.

He was quick to calm himself down by saying, “That woman is an idiot,” before asking of the biography, “Why is it relevant and what’s the point of it and how well-sourced is it?” He allowed that her public statements are fair game, but didn’t like the amount of factless speculation in the book.

Here’s the ultimate takeaway: if you write an anti-Sarah Palin book and Keith Olbermann is saying you crossed a line, you CLEARLY did something wrong.