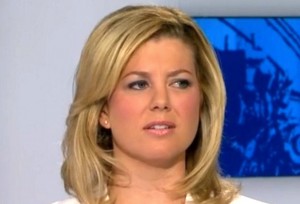 What a strange mainstream media we have. Immediately following Hillary Clinton‘s exceedingly gracious response to Bernie Sanders‘ completely unprovoked attack on her, CNN reporter Brianna Keilar weighed in on the feud by saying that the whole thing was Hillary’s fault, and that Hillary was only “ratcheting things down” because her campaign is afraid of the damage that could result from “poking the bear”:

This is Hillary Clinton trying to ratchet things down a little bit. And I think you have to understand that what we saw from Bernie Sanders last night did not happen in a vacuum. I was there at the rally. This was something certainly that his supporters loved. There were about 10 thousand people there at Temple University and they were just eating this up. What we have seen — and this was actually something that my colleague Jeff Zeleny broke after Bernie Sanders’ Wisconsin win, is there is this new Clinton strategy where the campaign is trying to go after Bernie Sanders more aggressively despite concerns about unifying Democrats for a general election. We saw her ratchet this up last week. I was covering here at SUNY Purchase out of New York City. And she took on protesters labeling them as Bernie Sanders supporters and said ‘Look, I’ve got 2.5 million more votes than Bernie Sanders.’ So we’ve seen her sort of ratchet this up. The latest was he talked to the New York Daily News. He had a number of stumbles, including on really explaining himself on how he’d break up the big banks. She said a number of things that if you are a presidential candidate that you are probably a little irritated with, that he’s not done his homework and she’s not sure he’s a Democrat. And what we saw last night is Bernie Sanders ratcheting it up even more. So it seems to me a little bit that Hillary Clinton has sort of poked a bear. And I think it is a bear that the Clinton campaign didn’t necessarily think really has a shot at the nomination but it doesn’t mean it is not a bear that can’t also do damage.

Wait, what? Now, I know Bernie Sanders also doesn’t always get treated fairly by the press, but in what universe is any of this true? Hillary and Bernie have been campaigning pretty hard at each other for months, but the example Keilar gave, a Hillary rally at which she was directly responding to pro-Sanders hecklers, occurred in the full throes of a barrage of attacks by Sanders and others over her fundraising, and as previously noted, Sanders’ attack last night wasn’t just completely unprovoked, it was anti-provoked.

As for Hillary’s response being motivated by fear of the poked bear, that’s certainly one way to look at it, but when “the bear” is doing damage to himself, isn’t it more likely that Hillary is wisely getting out of the way? If you watch the interview that so offended Sanders, the one where she refused to call him “unqualified” three times, that’s pretty much what Hillary did. She didn’t twist the knife, she echoed the sentiments of many objective observers, including Keilar herself, in fairly gentle fashion.